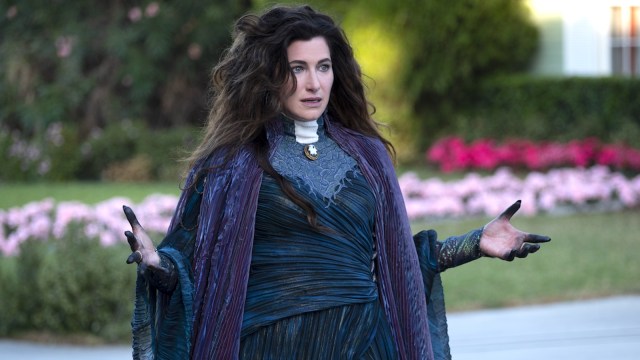 Fans were mesmerized when Agatha Harkness‘ award-winning theme song was played in Marvel’s WandaVision. So when it was announced that this witchy villain would receive her own Disney Plus show called Agatha: Coven of Chaos, one question that came to mind was if the show would receive a similar music treatment. Luckily for fans, we might have just received an answer.

Kathryn Hahn, the actress behind Agatha in the MCU, told Variety in an interview that she doesn’t know. However, if you listen to how she answered the question, it sounded like a panicked answer rather than a solid response. She ended her response by pulling back and leaving a small Game of Thrones reference.

Hahn isn’t the first MCU star to play coy in interviews whenever asked about details of upcoming projects. Back in July, Doctor Strange in the Multiverse of Madness star, John Krasinski, managed to avoid the question when asked about his future in the MCU and if he would be reprising his role for the upcoming Fantastic Four film. Meanwhile, multiple celebrities that have been confirmed to join the MCU, such as Harrison Ford and William Jackson Harper, kept quiet about their future roles.

Agatha: Coven of Chaos is the sequel series following the events of WandaVision, except this time it’s about the show’s main villain. So far, Hahn and Emma Caulfield Ford will be reprising their roles as Agatha and Dottie. Meanwhile, Aubrey Plaza (The White Lotus), Maria Dizzia (The Staircase), Joe Locke (Heartstopper), Ali Ahn (Orange is the New Black), and Sasheer Zamata (The Mitchells vs. the Machines) have been confirmed to star in the series.

Agatha: Coven of Chaos will be released on Disney Plus in 2023.