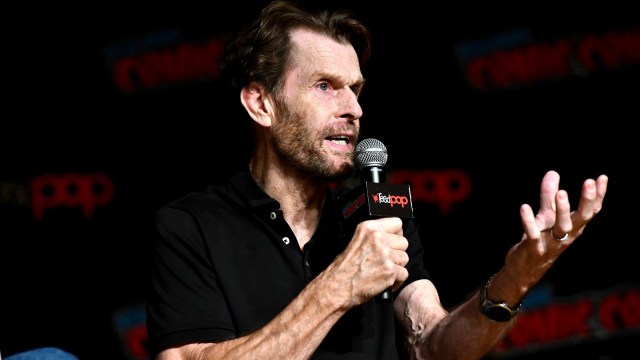 Batman fans everywhere are in mourning today following the tragic news that legendary voice actor Kevin Conroy has passed away at the age of 66. Thanks to his hugely prolific performances as the Dark Knight, ever since debuting in the role three decades ago this very year with 1992’s Batman: The Animated Series, Conroy’s name will forever be attached to that of DC’s most popular hero.

And yet, Conroy also had a busy voice acting career outside of his most famous role. In fact, his last project to be released prior to his death saw him add yet another iconic animated character to his already long list. Netflix’s CG reboot He-Man and the Masters of the Universe premiered its third season this past August, and it ended with a shocking reveal that thrilled both old-school He-Man fans and any Batman lovers watching.

The season three finale ended with Skeletor’s right-hand woman Evil-Lyn coming face-to-face with her long-lost father, Hordak—one of the most powerful villains in the MotU canon who had previously appeared in the original 1980s cartoon franchise and N.D. Stevenson’s acclaimed She-Ra and the Princesses of Power. As an added bonus, Conroy voiced the antagonist. Check out his scene below:

This was a genius piece of casting for two reasons. A) it allowed Conroy to play the villain for once, subverting our expectations of him from Batman. And B) his hiring served as a counterpoint to Mark Hamill playing Skeletor in Kevin Smith’s Masters of the Universe: Revelation. Conroy and Joker actor Hamill are obviously old B:TAS co-stars.

Clearly, it was the intention to have Conroy return as Hordak for season four, but it’s currently unclear if he managed to record his lines for the next run of the series prior to his passing. All three seasons of He-Man and the Masters of the Universe are available to stream on Netflix.