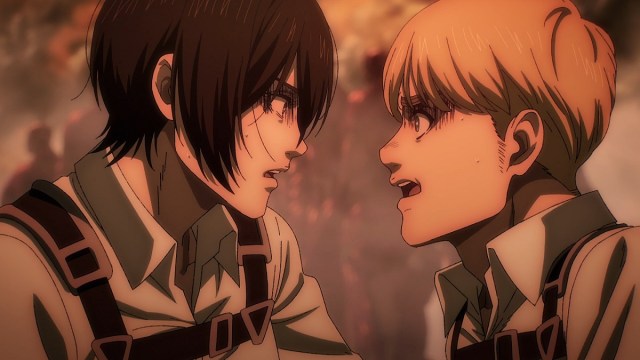 It’s been a while since we heard anything about Attack on Titan. MAPPA is busy producing the final batch of episodes, which will have the remainder of the Scout Regiment and their new Marleyan allies racing to stop the protagonist Eren Yeager from destroying the world in his rumbling onslaught. But if you miss the ensemble too much and can’t possibly wait another couple of months for the final season’s premiere, then perhaps this new promo poster might scratch that itch.

In other news, Dave Chappelle is riffing into House of the Dragon with his SNL parody as Game of Thrones alum Jacob Anderson reveals if he’d be interested to reprise Grey Worm in the planned Jon Snow sequel.

Eren is on the move alongside hundreds of thousands of Colossal Titans with one goal in mind: To destroy the entire world and secure a peaceful future for the Eldian race. In the forthcoming Final Season Part Three, the main character’s most trusted friends and comrades push ahead to stop him and save at least a few countries from this mindless rampage, but will they get to Eren on time? And what will become of the Eldians now that Eren has all but proven to the rest of the world that they were the murderous savages everyone thought they were?

This new poster which has generated a lot of hype for the world’s most popular anime series shows Armin, Mikasa, Connie, Jean, Reiner, and a wounded Captain Levi using their ODM gear to close in on Eren. We’re officially entering the manga’s final arc, folks.

Fans are hoping that MAPPA decides to change Hajima Isayama’s controversial and divisive ending, but with the show remaining almost entirely faithful to the source material over the years, that scenario sounds highly unlikely. At any rate, we’re excited to see our favorite characters return to the small screens. So, by all means, shinzou wo sasageyo one last time!

Jacob Anderson would return for the Jon Snow sequel, but only to finish the job

The Jon Snow sequel is one of the most absurd things we’ve heard from HBO in a while, but it seems that the network is pretty serious about resurrecting the Game of Thrones lead for one last hurrah. As for whether any of the old cast members would follow them in this venture, Jacob Anderson (Grey Worm) has made it pretty clear that it’s unlikely for his character to appear in the spinoff unless he’s there to finish the job and kill Jon.

“I think it’d be pretty tense if he did,” he said in a recent interview. “I think the only way that Grey Worm would show up in that show is to kill Jon Snow.” Frankly, we’d be willing to see him try.

With so many spinoff shows in development, including one centering around the Sea Snake, one involving the tale of the ten thousand ships, another featuring Dunk and Egg, and lastly, an extremely experimental project pondering the machinations of the mysterious Yi Ti dynasty east of Essos, we’d actually be surprised if this sequel ever saw the light of day.

Saturday Night Live skits have always been hit-or-miss, but the latest starring Dave Chappelle and a number of folks from his comedy show and parodying House of the Dragon, of all things, will definitely go down as one of those hits. From the hilarious and riding-it-too-thin jokes to the impeccable and on-brand costumes and set design, everything is extremely reminiscent of the hit spinoff show that has managed to reignite interest in Westeros as a brand.

In fact, with SNL now officially resuming their Game of Thrones skits, the franchise might be officially back from the dead after that disastrous final season. What’s more, in a few years’ time, House of the Dragon will probably manage to imitate that insane level of popularity and hype that surrounded its predecessor. Let’s just hope that HBO manages to stick the landing this time around when they reach the finish line.