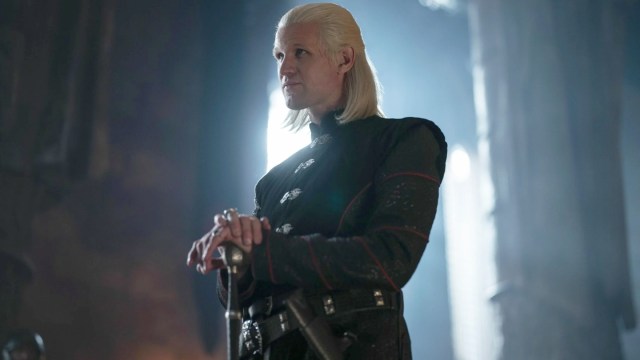 The latest House of the Dragon episode was full of intense moments in the king’s court, though almost all of it involved the Greens and their struggle to supplant Rhaenyra. But even though some characters like Daemon Targaryen were completely absent from the penultimate outing, the Rogue Prince’s name still managed to come up in the online circles for a very interesting reason.

And then there’s that scene with Alicent Hightower and Larys Strong again. I know, you’re already sick of hearing one more word about how grossed out we were to find out their dirty little dynamic. It’s one of those moments that will forever live in infamy. Many people will no doubt be talking about it many years from now, when House has all but concluded its run, which, according to its creator George R.R. Martin, will comprise four seasons in total.

We have rounded up all of that and more for you in today’s latest tidings from the world of Westeros.

‘House’ director explains why the Hightowers are in deep doo-doo

The Hightowers have always been in a precarious situation thanks to Viserys proclaiming Rhaenyra as his heir, even though the laws of the Seven Kingdoms frown upon a woman picking up the mantle of ruling in the first place. Even with Vhagar tamed and loyal to Aemond, the Blacks outnumber the Greens by far, whether we’re talking about the number of dragons or lords and ladies sworn to their cause.

According to director Clare Kilner, Otto Hightower had intended to keep Rhaenys and her dragon Meleys in King’s Landing, thus stripping the Blacks from a crucial advantage. But with the Queen Who Never Was breaking free and riding to Dragonstone, the Hightowers will find themselves in quite a predicament.

Okay, internet, we get it. You really, really love Daemon Targaryen. The charismatic Rogue Prince has been a centerpiece of this entire conflict ever since making his debut in the pilot episode and has continued to keep that limelight fixated on himself despite having little to do each week. That adoration reached its zenith this week when Daemon started trending without even showing up in “The Green Council.” It actually has to do with the previews for this week’s finale, which shows the protagonist risking his life to attain yet another dragon egg for Rhaenyra and his children. The things we do for love, eh?

We probably shouldn’t be laughing about this disturbing scene between Alicent and Larys — which is admittedly exploitative in nature — but in a television show that has all but normalized incest for its viewers, what is a bit of kinky heavy petting? You’ll have to excuse that turn of phrase, but this meme that has gone viral over at Reddit in the past few days won’t be any better. In fact, we’re willing to bet that little wordplay on Alicent’s situation is going to give you a good chuckle, so make sure to check it out here if you have a moment to spare.