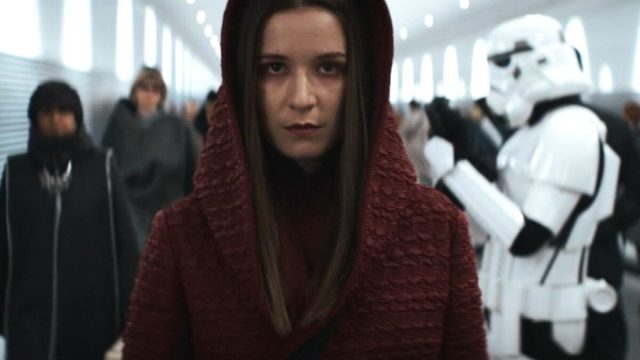 Perhaps the most common gripe about Andor is that whole episodes go by with not much action. Well episode 7 — “The Announcement” — features a swanky cocktail party at Mon Mothma’s house, has the Imperial intelligence system debating tactics, and our hero is just trying to lie low in space-Miami.

But if you’re on this show’s wavelength all of the above was gripping, particularly Mon Mothma trying to raise support for the Rebellion under the nose of her Imperial guests. Sure, Andor isn’t doing much for those demanding lightsaber duels and X-Wing vs. TIE Fighter battles, but it’s very much our jam.

But if the teases in this episode are what they look like, we may soon get an appearance from Star Wars‘ top evil cackling grandpa.

Is Andor hinting at the arrival of Emperor Palpatine?

Andor hasn’t had so much as a glimpse of a Force user in it, though this week we got some namedrops that may mean Emperor Palpatine is on his way to the show. ISB head Wullf Yularen revealed he’d spoken directly to Palpatine about the Aldhani heist, we got word that Palpatine will address the Galactic Senate on the matter, Luthen and Mon Mothma said that Palpatine “won’t hesitate” to act now, and later said she’d learned some lessons in duplicity from observing his politics.

So, could this all be teasing a Palpatine appearance? Ian McDiarmid always seems happy to play the character and if Andor really is about examining the Empire it’d make sense to see the leader of it. This might only be footage of him in the Senate, but we’d love to see him face-to-face with Mon Mothma in what’d be an incredibly tense moment. Fingers crossed it pans out this way.

A familiar face from Rogue One returns

This week’s Andor ended with our hero being dragged off to serve a six-year sentence for being in the vicinity of a crime, though it’s likely he’ll bust out of there very quickly. Along the way, we saw that the Imperial Shoretroopers are using a very familiar droid model to keep the peace. This is the KX series security droid, one of which will someday become Andor’s ride-or-die robot buddy K-2SO.

But is the droid we see interacting with Cassian the future K-2SO? Well, there’s already a canon comic showing how the pair first met, though it seems likely that this will be retconned as the show goes on. Whatever the case, Cassian has to bust out of Imperial prison somehow, so why not reprogram one of his guards to help out? The showrunners clearly knew what they were doing with the droid’s dramatic entrance, so this plotline is definitely going somewhere.

Andor brings in an important character from The Clone Wars

Andor doesn’t have many obvious connections to other Star Wars stories taking place in this time period, but also firmly in canon. So fans were delighted to see The Clone Wars and Rebels‘ Wullf Yularen as the leader of the ISB. Fans of The Clone Wars will recognize him as Anakin’s Republic military partner from during that conflict, later going to appear alongside Admiral Thrawn in Rebels.

Yularen’s story ends with his first on-screen performance in A New Hope, with his tale coming to an explosive end as he was aboard the Death Star when Luke hit a bullseye on its thermal exhaust port. We may see more of Yularen in Andor as the show focuses on the ISB, so maybe we’ll get some more interconnectivity between Andor and the CG animated shows.

Now we go from the gritty and realistic corner of the Star Wars universe straight to its polar opposite, as Lucasfilm has just unveiled new episodes of Star Wars Galactic Pals on their website. This is a cartoon aimed at very young children and follows ‘The Galactic Society of Creature Enthusiasts’ in shorts that explain how to care for various baby Star Wars animals.

There are now two shorts up giving tips on how to care for a rancor and a tauntaun, with subsequent episodes featuring ortolans, porgs, loth-cats, and — shudder — gungans. Adults obviously aren’t going to get much out of this cartoon, but if you want your kid to grow up to be a die-hard Star Wars fan this seems like a great place for them to start.