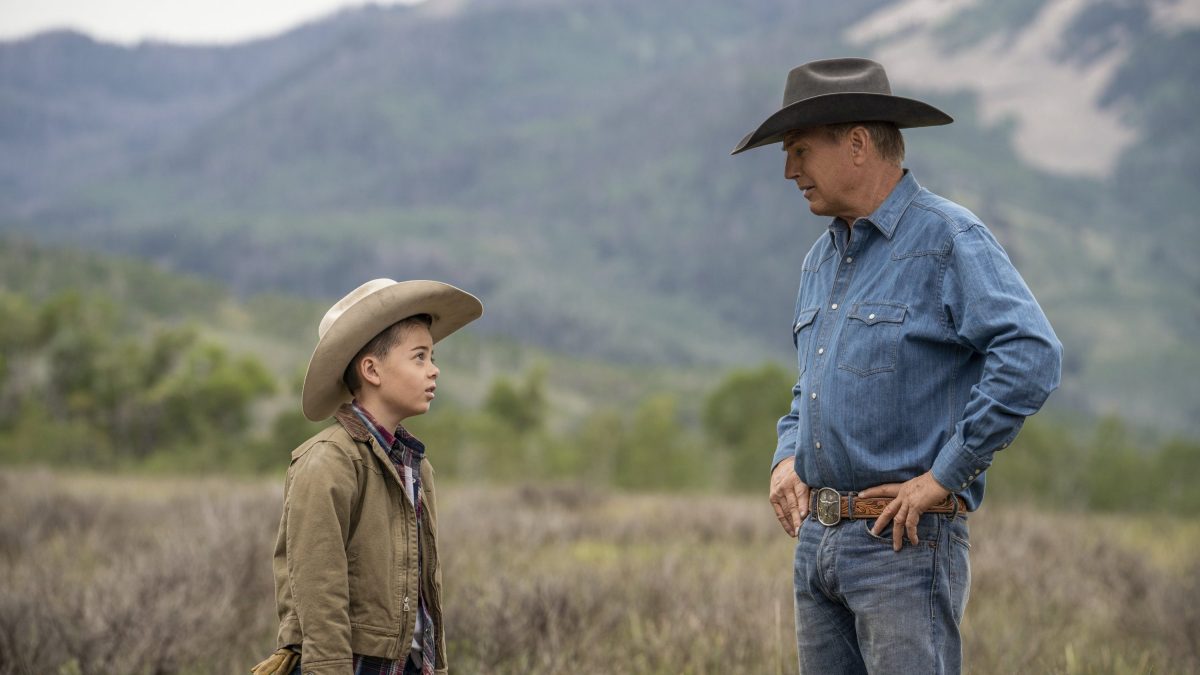 Happy Tuesday, Yellowstone fans, we’re still early in the work week, but with an exciting weekend in the Taylor Sheridan realm just days away, there’s a lot to talk about where the Duttons are concerned. The countdown for the new prequel, 1923, is drawing shorter, and fans can’t wait to see Harrison Ford and Dame Helen Mirren in action as Jacob and Cara Dutton. Speaking of Duttons, you’d be hard-pressed to find one as good as John Dutton himself, and the actor who plays John’s grandson, Tate, is sharing some important and life-changing advice that Kevin Costner gave him about acting and balancing it with life. And Lainey Wilson is sharing some insight into her sweet kiss with Ian Bohen’s Ryan in the latest episode; we’re all here for their budding romance. You know the drill from here: grab your Yellowstone-loving bestie and your drink of choice, and let’s ride in.

Brecken Merrill’s Tate Dutton has experienced quite a bit through his journey as a Dutton. Everything he’s been through would have set most people up for heartache and a dull look at life, but Tate still has a zest for life and the ability to find joy. Merrill brings a childlike innocence to the role, even though it feels like Tate lost his so many years ago.

During a recent episode of the Dutton Rules Podcast, Merrill shared that Kevin Costner gave him advice regarding being in the industry as a child, and he took it to heart.

“In between takes, he said that — because I’m a child actor — don’t sacrifice your childhood if you don’t really enjoy it. It made me think, ‘Do I enjoy acting? Do I want to continue?’ And the answer is yes, I do want to continue and he kind of cleared that up for me.”

Giving Merrill that advice at a critical time in his life signals who he is as a man and what he values in life. Costner has been in the business for decades and knows what it can bless you with and what it can take you away from. Acknowledging that Merrill was at an age where it was important to recognize that he still had a childhood to live was a sweet “grandfather” moment between the two.

Some of our favorite scenes in the series, although there aren’t many of them, are the ones with Tate and John. They forget the rest of the world and the weight on their shoulders and enjoy one of the best relationships life can give us: a bond with a grandparent.

Lainey Wilson joined the season five cast as a musician named Abby, who is making heart eyes at our beloved ranch hand, Ryan. The couple we are quickly falling in love with has been making us swoon since Wilson joined the cast this season, and we’ve been thinking Ryan deserved a love interest for some time now.

While Wilson is no stranger to the entertainment business, she’s a country music singer making us swoon with her powerful lyrics on everything from heartbreak to love. Acting is a new foray for the star, and she’s jumping into it head first.

Speaking to USA Today, Wilson said she knew she had to make her kiss on last week’s episode feel real, and the couple totally pulled it off.

“I didn’t really know what I was doing, but you go in there head-first. I was going to give people their money’s worth. I told my mommy and daddy, ‘You might not want to watch this show.’ I don’t want to be on their prayer list.”

It wasn’t just the kiss that wrapped us up; the looks they shared before the big moment, and the way it seemed like they were ignoring everyone but each other made us believe the story they were selling. In a chat on Reddit, Bohen and Wilson shared that they’d love to get to keep working with one another, with Bohen saying that he wants Wilson in every single episode from here until the series closes.

Jumping from one extreme to the next, fans also can’t stop talking about Jamie Dutton and the way that no matter what growth opportunities he’s given, he refuses to take them. Jamie wanted to have the title of Governor of Montana, but John is wearing the mantle instead. Of course, this has angered Jamie, and even though he’s working on his campaign — it’s not all sunshine and rainbows for the father and son relationship.

With all of the negativity in Jamie’s life, fans are wondering why he doesn’t just move away and start anew somewhere, maybe find a job away from politics altogether and find a way to leave the Dutton name behind. It’s not his initial game plan, perhaps not even his ideal future, but nothing he’s really desiring is headed his way now. Why not take matters into his own hands?

Some fans believe that Jamie might, dare we say, be playing the long game with Sarah. Perhaps he’s taking control of the situation and getting her right where he wants her to strike when necessary. Maybe it’s a classic tale of keeping your friends close and your enemies closer.

Some fans say that the series needs his “slimy” character and that he won’t leave because he creates good drama. We can’t deny that; the series would be backing a specific type of unkindness if he were to pack up and move.

Other fans say there’s too much dirt on Jamie for him to be able to up and leave, and we all know one Dutton who is ready and willing to spill all of the tea — or whiskey if he were to go. Plus, they’re not prepared to see him stop suffering yet.

Here’s to Beth never letting Jamie get a good night’s sleep again, to Ryan and Abby, and to Kevin Costner and his wisdom that we’d all do well to listen to.