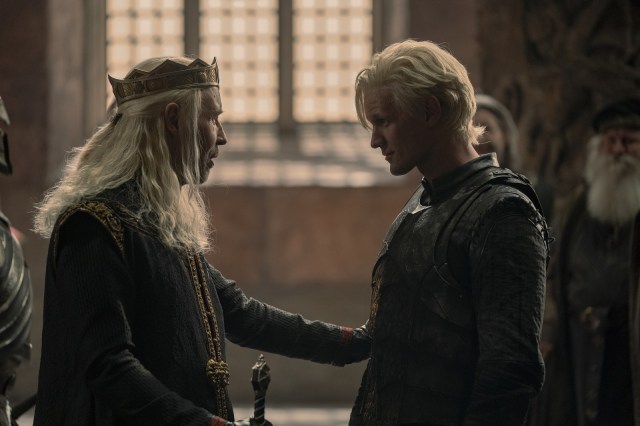 The Targaryen brotherhood drama in House of the Dragon has been steadily ramping up, and Matt Smith explains how it all works. The actor plays Daemon, the unwieldy younger brother of King Viserys (Paddy Considine), and their struggle for power is a constant point of contention.

In an interview with Entertainment Weekly, Smith explained that this isn’t so different from how real brothers relate to one another.

“I think it’s complicated because it’s familiar and normal in many ways. It’s very brotherly and like any kind of brotherly relationship, there are different power dynamics. One time one is in control, then the other is in control. Hopefully you’ll feel a sense of history and brotherhood when you watch it.”

To say Daemon and King Viserys’ relationship is complicated is quite an understatement. Viserys is a more serious and professional man who uses restraint instead of power as one of the only Targaryens on the show who doesn’t ride a dragon. Daemon is an out and proud dragonrider, soaring atop of Caraxes and enjoying all the chaos and destruction.

Viserys has the weight of the kingdom on his shoulders and has the difficult decision of naming his heir. The main options are his brother Daemon, his daughter Rhaenyra (Milly Alcock), or his son Aegon II. Daemon’s reckless behavior doesn’t make him the most comforting prospect for the Iron Throne, but the king allows him to get away with many acts because of their bond.

Daemon isn’t someone who runs away from power. Instead, he seeks it out as if to prove a point to his brother. Daemon and Corlys Velaryon (Steven Toussaint) had an epic battle in the Stones — against the Triarchy, and in spite of Viserys’ indifference, all in an effort to cement himself as a true warrior, and when his older brother offers him ships, the gesture enrages Daemon. It’s not exactly the response you want when you give someone a gift.

The Targaryen brothers aren’t the only ones with complicated relationships. Emily Carey has admitted that she struggles with the complex character relationships in the Game of Thrones prequel series playing Alicent Hightower. Between her controlling father Otto Hightower (Rhys Ifans) and her husband King Viserys, it’s a lot to handle.