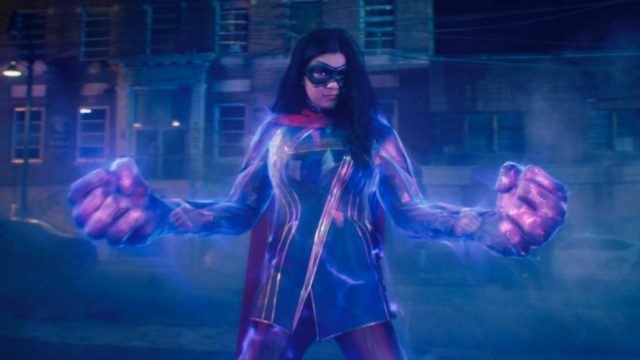 Longtime Ms. Marvel fans weren’t happy when rumors began swirling that the MCU version of Kamala Khan wouldn’t be identical to her comic-book counterpart. Most of that anger centered on her powers: in Marvel Comics, Kamala has stretchy abilities akin to Reed Richards, but in the MCU she has energy-based powers broadly similar to a Green Lantern.

The reasoning for this seems to have been that while Kamala stretching into strange forms works in a comic book, it looks off-putting in live-action. On top of that, getting it to look good would be a much trickier job for the VFX team. The show is so good that this has been a low-key grumble over the first five episodes, though most eventually accepted that the change was necessary.

But today’s season finale finally shows a more comic-accurate depiction of what Kamala can do. While pinned down under fire from Damage Control, Kamala decides to “embiggen”, using her energy powers to make herself into a car-smashing titan as she battles the heavily armed soldiers.

Fans are loving it.

Some are happy she said the line:

It gave others goosebumps:

Embiggened Kamala is getting a lot of love:

After this demonstration of what she can do many are hungry for more Kamala:

The wait finally paid off:

And you might want to turn down your volume for this one:

Kamala will make her way to the big screen in July 2023’s The Marvels, though the revelations about the true source of her power in the closing moments of the episode may make her a lock to appear in a certain X-cellent superhero team soon to make their MCU debut…

Ms. Marvel‘s first season is available in full on Disney Plus.