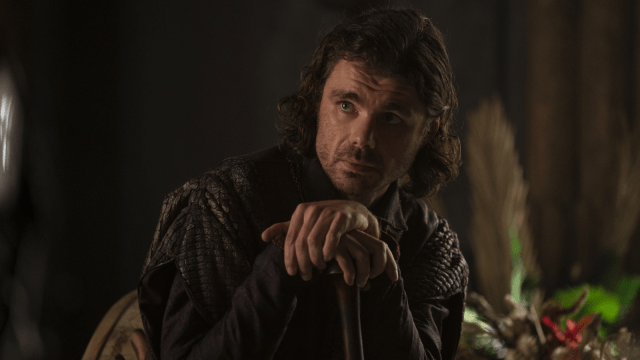 Warning: this post contains spoilers for the first season of House of the Dragon.

You can’t count on much, but you can count on Game of Thrones having some pretty twisted sexual politics. In episode nine of House of the Dragon, we got a chance to see just how twisted Alicent Hightower’s relationship with Larys Strong is. After a strange and slightly loaded conversation with her father, Alicent returns to her chambers and discovers Larys there waiting for her. He proceeds to tell her that he has some information she should know, but doesn’t go into specifics. Well, he doesn’t go into specifics until Alicent takes off her shoes, and then her stockings. Larys reveals that her father has been using a spy network to gather information, and then proceeds to pleasure himself to her feet.

It’s a shocking scene, one that feels both hilarious and alarming. It explains why Alicent took her shoes off during a previous scene with Larys, and it also gives us a darker vision of what their relationship is like. Thanks to a new interview with Variety, we also know how Olivia Cooke, who plays Alicent, feels about the moment.

“It’s disgusting, it’s demeaning, it’s assault. But she’s not really left with any choices,” Cooke said of the scene in which Larys gets off to her feet. “She’s surrounded herself with psychopaths and murderers. There’s no one else to turn to. Maybe she thought she could turn to Talia, but she’s turned out to be a spy.”

Cooke also said that Alicent knows what kind of man Larys is, but needs the information he’s able to provide.

“She knows what Larys can do, how powerful he is and how he won’t stop shy of killing his entire family in order to progress in this court. The dynamic shifts slightly all the time over the scene. He probably holds more weight. It’s difficult, because she has no choice but to go along with a lot of the things that he does. She needs the information. Ultimately, she knows how she’s going to get it. If she doesn’t have the information, it could result in her death or in her usurpation or in her children’s death. I don’t think any of this is taken lightly. It’s just an absolute necessity, unfortunately. I don’t think there’s any manipulation going on. It’s just she needs the information, and this is how she gets it.”

Clearly, Alicent has found herself between a rock and a hard place. Larys Strong is not a good dude, but he’s one of the only allies she has.