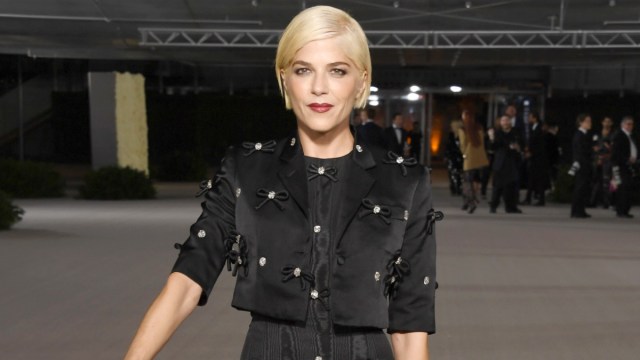 Selma Blair made an emotional early departure after just five weeks on season 31 of Dancing With the Stars, citing complications with multiple sclerosis. After years of illness, the 50-year-old actress was diagnosed in 2018 with the disease that causes nerve damage which disrupts communication between the brain and the body.

Blair shared the news with both her dancing partner, Sasha Farber, 35, and the audience during a pre-recorded segment during Monday night’s show. “You know I’ve been monitored, and in touch with my doctors this whole process…I had MRIs and the results came back, and it all adds up to…I can’t. I can’t go on with the competition. I’ve pushed as far as I could,” she told Farber. “I’ll have to settle in and get back to being a mom, and pull back on something I love doing, and sometimes you make hard decisions.”

Blair elaborated in a backstage video, “But I really, you know, want to have one last beautiful dance with you, and bow out. With a chronic illness, you do have special considerations, and my body is definitely taking a hit. It’s way too much for the safety of my bones, there is just intense bone trauma and inflammation, among rips and tears, so I could do extensive damage that, of course, I do not want.”

“So, this is a dance for everyone that has tried and hoped they could do more, but also, the power in realizing it’s time to walk away,” she continued. “I am so, so grateful to be able to do one last gentle dance.”

Following Blair’s sad announcement, the pair performed a slow waltz to Andra Day’s version of the classic 1965 Hal David and Burt Bacharach song, “What the World Needs Now Is Love.” The theme on Monday’s episode was “Most Memorable Year,” and the performance was choreographed to reflect 2018, the year when Blair was diagnosed with MS.

“This night will go under my pillow of sweet dreams for the rest of my life,” Blair shared on Instagram along with a video of the first dance she and Farber performed on the season—a waltz to “The Time of My Life” by David Cook. “My thanks is immeasurable [Sasha Farber], Disney Plus, and Dancing With the Stars. “Thank you to all of you who voted and watched.”