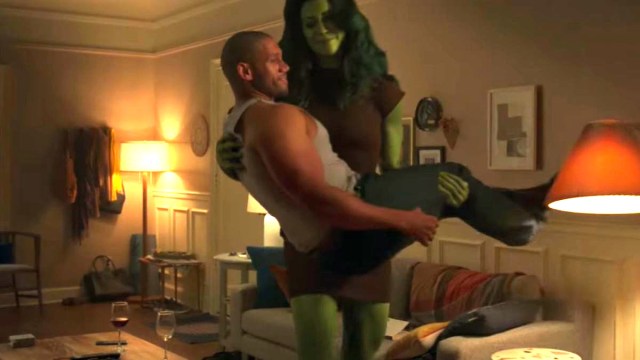 That’s to be expected given that the trailers and promo spots have variously shown Tatiana Maslany’s Jennifer Walters diving into the dating pool, literally carrying a man to her bedroom, and even discussing the subject of Steve Rogers’ virginity. As showrunner and lead writer Jessica Gao revealed to Entertainment Weekly, though, it goes much deeper than that.

“A thousand percent, I’ve been saying repeatedly that we are a very horny-forward show. We’re just all very sex positive, and so this is a very sex positive show. And we don’t want it to feel like a taboo, because this show is supposed to be a well-rounded, realistic portrait of a woman’s life — a single, 30-something-year-old woman — and sex is a part of everyone’s life. It is basic biology. It is a very normal, healthy part of human beings. We didn’t want to feel like we’re going to paint a picture of this woman’s life, but not that part.”

Some audiences won’t be expecting a family-friendly Disney Plus series to tackle the issues of sexuality, especially as it pertains to a gamma-radiated lawyer with muscles for days, but that was part of the appeal that drove Gao’s take on the comic book adaptation.

“In Marvel movies, they have other things to worry about — they’re trying to save the world, they’re trying to save the fate of humanity, so there’s not a lot of time to then be like, ‘But also, what’s happening in the apps?’ for them. But on our show, because it is showing her daily life, the universe isn’t at stake, so that is something that we really wanted to make sure that we focused on. The entire show isn’t just about her dating, but it is an aspect of her life.”

She-Hulk: Attorney at Law has been receiving strong early notices, but we’ll see how the pearl-clutching subscribers and unsuspecting viewers react to Gao living up to her ideology of “pushing some boundaries” in regards to sex and the MCU.