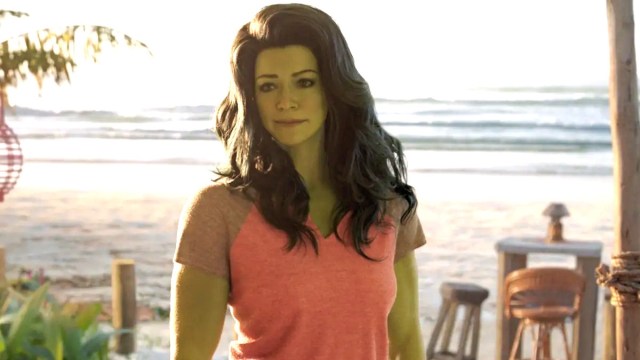 Last week’s She-Hulk: Attorney at Law pilot established the surprising truth of Captain America’s love life, while also outing Jennifer Walters as a massive Steve Rogers fangirl. Despite the topic of conversation moving away from Cap’s virginity in today’s second episode, it still found time to sneak in a salute to the Sentinel of Liberty in a cheeky, easily missed easter egg.

After being fired from her job, a depressed Jen is surfing the internet looking up potential new forms of employment — which results in an unexpected Eternals tie-in and a shocking Wolverine reference — when she receives a text from her parents inviting her to a family dinner. If you pause the scene at this point, though, and draw your attention away from the text, you’ll notice Jen’s eye-catching phone lockscreen.

Yes, it’s the unmistakable buns of steel vibranium that is America’s Ass. The fact that Jen’s casually got Steve’s behind as her lockscreen, without any dialogue calling it out, is making it all the funnier for She-Hulk fans, who can’t get enough of the blink-and-you’ll-miss-it visual gag.

Jen’s lockscreen is a clear callback to her line from the last episode, when she drunkenly claimed that “that ass didn’t deserve to die a virgin.” Apparently this wasn’t just a off-the-cuff remark as the hero’s hindquarters are obviously something that she thinks about a lot. Like, a lot.

After all these callbacks to Cap’s backside in the span of just two episodes, we’re hoping that She-Hulk will continue to honor the Super-Soldier’s posterior each and every week to come. America’s Ass may be gone from the MCU, but there’s no reason it should be forgotten.