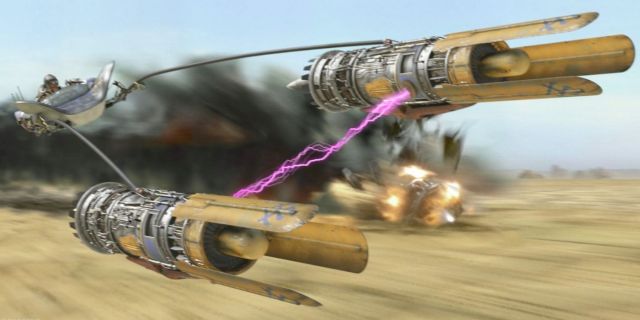 Information is thin on the ground about Star Wars: Skeleton Crew. Due sometime in 2023, the show is directed by MCU Spider-Man director Jon Watts and is described as a coming-of-age story focused on four teenage actors, with Jude Law starring as an older character. We also know it’s set in the same time period as The Mandalorian, The Book of Boba Fett, and Ahsoka, so perhaps we’ll see teens dealing with the fall of the Empire and life within the New Republic.

Now we can add one more thing to that list, as Skeleton Crew is confirmed to feature a Speeder Bike chase scene. YouTube channel Bespin Bulletin uploaded a video from the set, which appears to show a young actor in helmetless Stormtrooper armor crashing a bike and flying through the air.

Skeleton Crew began shooting in mid-August in Manhattan Beach Studios in Los Angeles Country, with its working title ‘Grammar Rodeo’ lifted from the classic The Simpsons episode ‘Bart on the Road. The first season’s shoot is expected to last for much of the rest of the year, though prior to this, Lucasfilm had taken care to film behind closed doors.

If the show is heading outside to shoot some stunts, we may yet see more of Skeleton Crew over the next months. Here’s hoping we get a better idea of how it’ll shake out, as a Star Wars adventure explicitly inspired by The Goonies and classic Spielberg sounds interesting if nothing else.

Star Wars: Skeleton Crew will be released on Disney Plus in 2023.