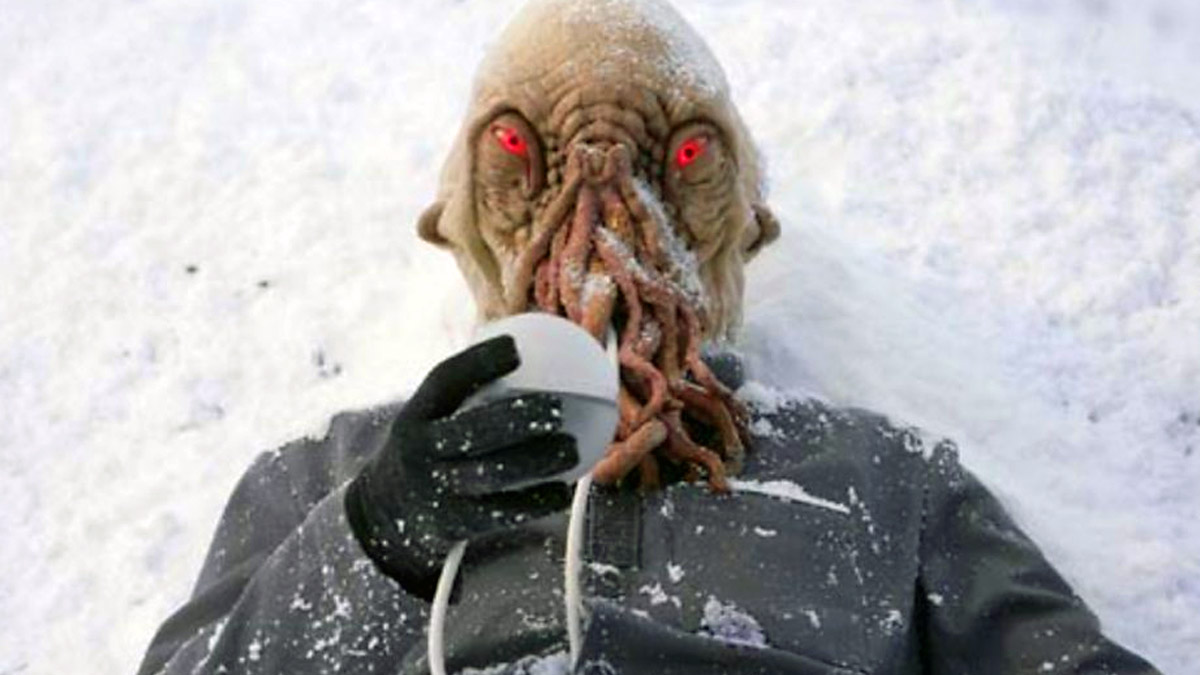 For an alien that travels in time and space, the Doctor spends a surprising amount of the festive period on Earth. Since returning to primetime TV in 2005, Doctor Who has stacked up an impressive 13 Christmas Day specials. It’s become such a TV festive tradition in the 21st century that it’s noticeable when the Time Lord doesn’t show up.

Dedicated holiday specials are a recent phenomenon, but when you’ve racked up more than 650 episodes over almost 60 years, you’d be unlucky to avoid Christmas.

Sure enough, the TARDIS has proved that you don’t have to land in December to make perfect holiday viewing. If you’ve exhausted the Doctor’s festive specials that we’ve handily ranked for you here, we’ve chalked up another 10 stories to catch when the snow’s falling.

Here are tales in time and space that will give you winter chills and laughs this holiday season.

Thoughts naturally turn to endings and beginnings as the year draws to a close. “The Tenth Planet” is Doctor Who’s Auld Lang Syne. It was 1966, and the show faced its greatest challenge yet. No, not Cybermen making their first appearance, but the change of its lead actor as regeneration entered the mythology.

The Cybers arrived at the South Pole in their horrifying Mondasian form, aiming to destroy Earth to save their own planet just as the First Doctor reached the end of the line. Doesn’t sound festive? Not only is there more snow than you can reasonably expect in a TV studio, but it’s also the tale the show returned to for the Twelfth Doctor’s Christmas swansong, Twice Upon a Time, in 2017.

Frost Fairs are thought to have been held on London’s frozen River Thames for 10 centuries, but their heyday was the “Little Ice Age” between the 17th and 19th centuries. It was a rare chance for Londoners to pile onto the ice with shops, food, drink, and even a famous appearance by an elephant.

The Twelfth Doctor and Bill Potts arrived at the 1814 fair during Series 10, where they had to contend with Dickensian pickpockets, racism, and the mystery of a colossal creature hidden under the river. A great script, fine jokes, and serious themes all wrapped up in a bow during one of the modern era’s best series.

Doctor Who had shuffled through the snow before, but in the show’s fifth season, the TARDIS landed in a future ice age, where glaciers cover Great Britain. It’s the first time the TARDIS crew encountered the Ice Warriors—the ancient reptilian race native to Mars that would become both enemies and allies to the Doctor in the future. On their first outing, they’re definitely the former, when Varga and his crew defrost after centuries under ice and immediately attempt to conquer the planet.

Like the monsters of the title, “The Ice Warriors” is a bit plodding, but it’s a reliably frosty black and white watch on a long winter’s night.

This four-part story formed the first chapter of the year-long “Key to Time” arc (season 16). Once the Doctor has been introduced to his new Time Lady companion Romana and dispatched on his quest to unite the Key, he arrived on Ribos, a wintry alien planet full of medieval intrigue.

Robert Holmes is regarded as one of the show’s all-time great writers, and his sparkling dialogue shines through the snow flurries. If that’s not enough, the cold of the planet leads Romana to sport a fantastic winter coat that would make Cruella de Vil’s head turn.

The modern era’s first jump to the past brought the Ninth Doctor and Rose Tyler to 19th-century Cardiff on Christmas Eve. It’s a thoroughly festive affair, complete with snow, Charles Dickens and mysterious ghosts, although it was filmed to air in spring.

It’s a lightweight trip to the past, but Simon Callow’s brilliant turn as the great 19th century writer is almost enough to convince us that zombies should become a Christmas tradition.

“The Planet of the Ood“

The Ood may not look like they’re built to last in low temperatures, but the Ood Sphere is a cold and snowy place. The moon of a ringed planet, it sustains permanent ice buildings between its mountains and cliffs.

The Tenth Doctor and Donna Noble took a trip to the planet on the aliens’ second appearance. Once again, something was up with the Ood’s telepathy, but in the wintry weather of their home moon, the TARDIS crew helped solve a murder, end hummanity’s enslavement of the race, and pick up a few hints about their future, too.

“The Waters of Mars“

The Tenth Doctor era developed a love for jokes about snow. Basically, if it looks like it’s snowing it probably isn’t. The Waters of Mars was an autumn special close to the end of David Tennat’s time aboard the TARDIS and matches the epic action romps of his biggest festive specials.

There’s dark themes in there, and the Tenth Doctor’s most dangerous hour in one of the show’s heaviest moments dips into the consequences of time travel. Originally developed as a festive special called “Red Christmas,” there are festive references throughout, including the Mars crew preparing Christmas dinner. There may not be any Ice Warriors on this trip to the Red Planet, but the Doctor can’t help expressing his love for snow. Naturally, a deleted scene reveals it’s actually carbon wash cleaning the atmosphere.

The two stories featuring the malevolent Mara were highlights of the Fifth Doctor’s time piloting the TARDIS, but it’s the second story that has everything you need for a holiday viewing.

Broadcast in January 1983, “Snakedance” centered around a vast festival, interrupted by the mind-dwelling monster of hate’s attempt to subjugate the people of Manussa. Once again, poor companion Tegan was the malevolent snake’s pawn. If that’s not enough, it features some of the show’s most fabulous masks.

“Asylum of the Daleks“

What says Christmas more than making room at the table for some family members you’re happy to see just once a year? The Asylum is where the Daleks exile the less desirable members of their pepperpot race, damaged and corrupted by centuries of conflict. The inhabitants pose such a threat that the Daleks would rather ally with their sworn Time Lord enemy than risk their escape.

It’s the Doctor’s arrival on the snow-covered planet that kicks off a nostalgia fest. Eagle-eyed Whovians can spot classic Dalek models from legendary past appearances in the Asylum, including “The Chase,” “Planet of the Daleks,” and “Remembrance of the Daleks.”

“The Daleks’ Master Plan: The Feast of Stephen“

The Doctor’s first Christmas special that wasn’t. “The Daleks’ Master Plan” was a 12-part epic set in the far future that’s now sadly almost entirely missing from the BBC’s archives. That includes the seventh episode, which was broadcast on Dec. 25, 1965, and suitably titled “St. Stephen’s Day.”

During this episode, the Doctor and companions celebrate Christmas, with the aging Time Lord even passing the season’s greetings onto the audience. There’s some confusion as to whether this was hastily scripted or an ad lib, but it was common for BBC shows at the time to include addresses direct to camera during Christmas episodes. This isn’t an adventure you can watch now, although there’s always the hope it could be resurrected in animated form one day. In the meantime, you can still catch up with the surviving three episodes and listen to the original audio.