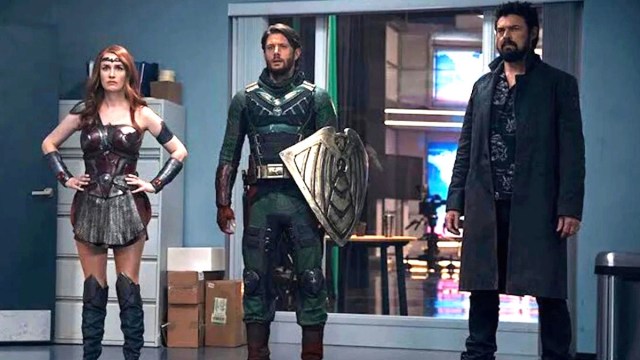 Smash hit superhero series The Boys has been known to poke fun at DC more often than not, but it’s unsurprisingly Kevin Feige’s Marvel Cinematic Universe that showrunner and executive producer Eric Kripke is looking to for inspiration.

Season 3 of the Prime Video favorite may have only wrapped up yesterday, but cameras on the fourth run of episodes are about to begin rolling imminently, while spinoff The Boys Presents: Varsity is hoping to finally gain some serious momentum after being beset by behind the scenes trials and tribulations.

Animated anthology Diabolical could potentially return for more 2D adventures, too, with Kripke admitting to Deadline that he’s in awe of how Feige manages to oversee the entirety of the MCU.

“There’s definitely crossover, and we’re doing our best to design a universe that sees some of the issues and storylines in Season 3 hand off to the first season in Varsity. Like there’s a presidential campaign happening in the background of that season, and there’s certain things that are happening at that school that are both in reaction to Season 3 of The Boys.

There’s Soldier Boy, etcetera, but also some new storylines that are happening in that season of the spinoff that we have to pick up and take into Season 4 of the show. I mean, it’s a very different corner of the world and it’s a different concern and thematic but it has been interesting.

I give Kevin Feige a lot of credit because now that we’re dipping our toe into trying to build a universe and trying to do it well I mean, the amount that you end up trying to not just telling the same mega story, and it’s hard enough to keep one fucking show straight but to try to keep two shows straight, have them each be entertaining and their own animal but they still lock together like Voltron or something is a whole new layer of challenge that. Yes! The fact of how well he does it, I’m more impressed than I’ve ever been.”

Feige is the best at what he does by quite some distance, so at least Kripke knows that trying to emulate the top dog of shared storytelling is the smartest way to continue building out The Boys.