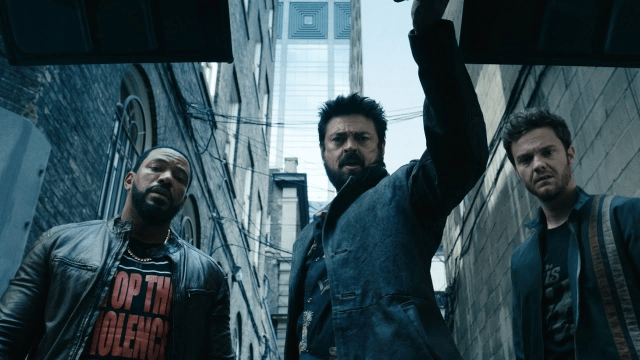 It’s the most thankful time of year, and even though the show would waste no time in drumming up a commentary on celebrating a holiday centered on being thankful a mere 24 hours before we all proceed to literally trample each other to death for the sake of a good deal on a television, we’re sure our favorite characters from The Boys are observing the day as best they can.

In fairness, maybe it’s hard to be thankful when you’re locked in around-the-clock guerrilla warfare with Superman’s homicidal contemporary and a psychokinetic politician, but we have no doubt that they’d find a way to do so anyway, especially with the show’s official Twitter account setting the inch-perfect scene for Thanksgiving with the Boys.

It doesn’t take much to dream up the scene in one’s head; Frenchie’s meticulous takedown of the turkey, the perfect symmetry of M.M.’s dinner table, the relaxing gravitas of Kimiko’s music, Annie’s silent gratefulness for life after the Seven, Hughie, ever the wholesome bottom, pouring himself out to the rest of the gang, and Butcher, likely alien to the holiday, secretly peeved at his confusion as to why the crew are doing anything other than gunning for the heads of Supes.

One responder raised the question of how Soldier Boy would be celebrating, but we know full well that he’d be in a very… unique food coma.

Others weren’t convinced by Butcher’s passivity, and suggested that he would be much further along than Annie at this point.

In any case, a respite from the daily life of harrowing vigilantism is prime thankfulness material right there, so let’s all raise a glass for this brief, fictional moment of peace in this great, fictional show.