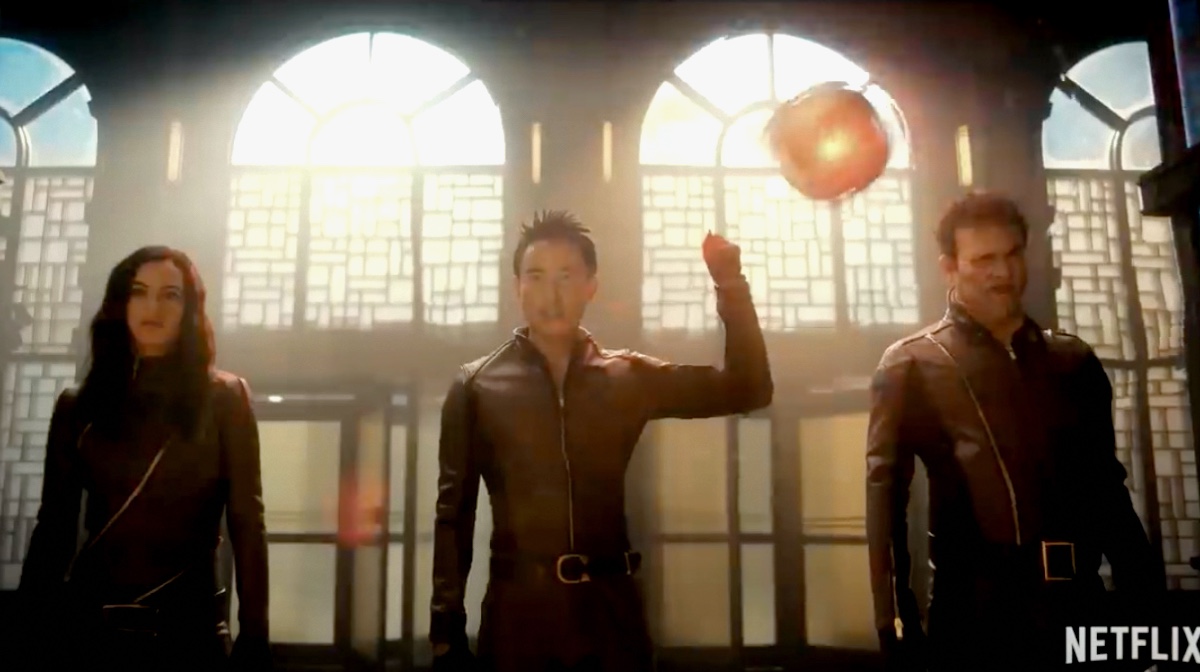 As fans will recall, the second season of the adaptation of Gerard Way’s popular comic book series left off on quite the cliffhanger. After the six surviving members of The Umbrella Academy returned to their present timeline from preventing yet another apocalypse in the 1960s, they find that they have been replaced by seven strangers calling themselves The Sparrow Academy — including a very much alive Ben Hargreeves / Number Six.

Essentially, having met his progenies in the past and finding them to be a disappointment, Sir Reginald Hargreeves changed the future by picking out a whole new (or “new to him,” in that one instance) crop of babies that he molded into crime fighters. And when you have two dueling groups of crime fighters, it only makes sense that tensions will quickly rise, as very clearly seems to be the case from what we’ve seen in the trailer.

As such, moderator Felicia Day gave the cast something to chew on by asking them which of their numeric opposites would win in a fight.

For Hopper, who plays Luther / Number One, it was fairly straightforward, since his counterpart Marcus has the same powers of super strength. Still, he answered that it would be tight, though Marcus is probably “a touch faster than the sluggish Luther.”

As far as the Diego / Ben matchup — since Ben is Number Two, not six in this timeline — Castañeda said he thinks that Ben would win. “But Ben would cry,” he joked. “He’d win but he’d cry.” Min, on the other hand, had other ideas in that Diego would be the one in tears. “I would win and you would cry,” he quipped, to immediate uproar from the panel.

“The knife would cut your tentacles dude, and it would hurt you,” Castañeda reasoned, but Min wasn’t buying it because he thinks Ben would kill Diego before letting that happen.

“Diego’s lovable, you can’t kill Diego,” shot back Castañeda, pointing out that Ben was too much of a “dickhead” to be lovable.

When it comes to Allison verses Fei (newcomer Britne Oldford), who uses birds to do her bidding, it was pretty much universally decided by Raver-Lampman and the rest of the attending cast that Allison would be a shoo-in with her “I heard a rumor” superpower.

And as far as a Five-off (and not like the one we saw last season) between Gallagher and Rodriguez’s Sloane, who has the power to manipulate gravity, it would also be a close call.

“I think Five would diffuse the conflict rather than fight,” Gallagher said. “[He’d] see if you guys were a threat or just like, ‘You’re in our house, we weren’t expecting guests.'”

“I think Five would make sure he understood the scenario before he starts killing people,” he reasoned, and was quickly roasted by Hopper, who pointed out that his assassin character has never done that before. “You just kill people,” joked Hopper. “Have I been seeing the same show?” “If I wasn’t quick she would totally win,” added Gallagher. “She’s got that blink thing.”

As far as what that “blink thing” refers to, fans will have to wait until June 22 when season 3 of The Umbrella Academy premieres on Netflix.