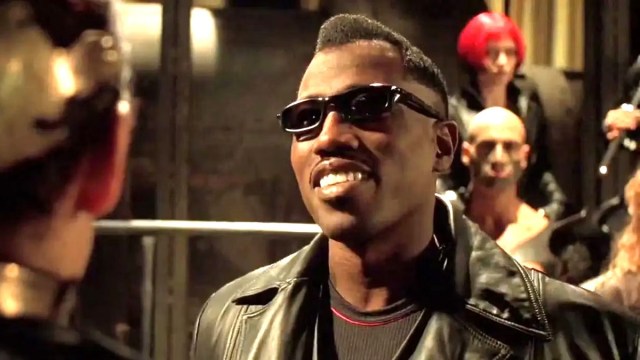 It’s been 18 years since Wesley Snipes last appeared in a Marvel movie, with Blade: Trinity marking his final outing as the Daywalker. Now, he’s finally back once again, though it won’t be quite what fans of his stylish and violent vampire-slicing character were anticipating.

As revealed at SDCC, Snipes is confirmed to provide a guest voice role in Moon Girl and Devil Dinosaur, an upcoming Disney Channel cartoon based on the modern version of the classic Jack Kirby characters. Yesterday the first clip emerged from the show, together with confirmation that it will boast an impressive roster of cameos.

The emoji-strewn hyperactive style is unlikely to please everyone, though we kinda like it. Lead hero Moon Girl will be voiced by Diamond White, with legend Fred Tatasciore squeezing in his 700th voice acting credit of the week as Devil Dinosaur. More excitingly, we’re getting a recurring role from Laurence Fishburne (who is also exec producing) as The Beyonder, which should give him some extremely hammy lines to chew through.

And then there are the guest stars, including Alison Brie, May Calamawy, Luis Guzman, Jennifer Hudson, Method Man, Cobie Smulders, and Snipes.

Sadly, even after this show’s protracted development (it was first confirmed as being in production in 2018) it won’t premiere until sometime in 2023. Here’s hoping this delivers more of the goofy action we see in the clip, and brings some of the bonkers antics from recent Devil Dinosaur comics into animation.

Devil Dinosaur as a member of the Fantastic Four, anyone?