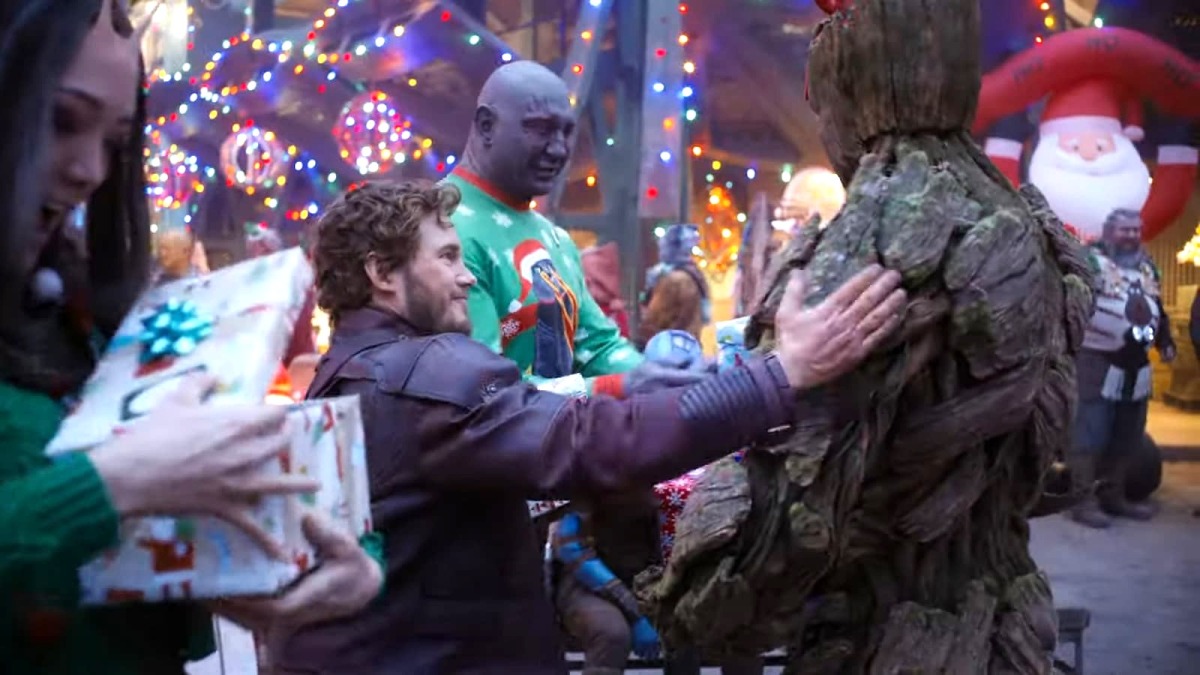 This Christmas, the Guardians of the Galaxy treated us to their spin on the infamous Star Wars Holiday Special. It’s a wry poke at another Disney property — one you won’t find in its entirety on the network anytime soon — but it isn’t all a joke. It may be the Disney+ equivalent of a special issue comic, but writer-director and Christmas song writer James Gunn chose this special to reveal some key plot developments, setting up the team’s return in the forthcoming Guardians of the Galaxy Vol. 3.

One of those was always going to be the next stage of Groot’s development. It’s a journey of a lifetime that has kept fans guessing since the mid-credit scene of 2014’s Guardians of the Galaxy.

No character in the MCU has undertaken a journey like Groot. He’s been growing up fast, and fans won’t be disappointed to find a new look for the Marvel favorite in the Holiday Special. In it, the Flora colossus — yes, he has a species — looks quite a bit older and more formidable, even if he doesn’t have to engage in action sequences to rival the movies. It’s clear he’s been taking his plant grow and is shooting up, but how old is Groot?

In the first volume of Guardians of the Galaxy, Groot’s heroic death was gut-wrenching… until the credits revealed that he’d resprouted as an adorable sapling. A mass of baby Groot memes blossomed as the taciturn hero was confirmed as one of the MCU’s most lovable characters. The plant-pot-bound dancing tot wouldn’t last for long, as we saw him grow through his toddler phase into a stroppy teen in Vol. 2 and on to a bulkier adolescent as he turned to dust and reappeared during the culmination of the Infinity Saga.

As Groot aged, James Gunn took to Facebook in 2017 to explain his alien growth rate.

“In terms of how fast Groot grows overall, I can tell you this: Baby Groot appears two months after the Infant Groot we see at the end of Vol. 1. The post-credits scene with Adolescent Groot and Peter Quill is YEARS after the ending of Vol. 2. I won’t say exactly how many years at this time, but be clear that it took him a fair amount of time just to go from Baby Groot to Adolescent Groot.”

The director added: “As a side note, I’ll point out that Peter Quill can obviously understand what ‘I am Groot’ means in the post-credits scene, so somehow he’s learned to understand him in the same way Rocket has.”

Naturally, that’s consistent with Quill and Groot’s relationship in the Holiday Special. But it’s not immediately clear how old Groot is at this point in the Guardian’s story as we head into Phase 5 and Guardians of the Galaxy Vol. 3.

We know that The Guardians of the Galaxy Holiday Special takes place at the end of the Phase 4 timeline, after Thor: Love and Thunder and the thunder god’s departure from the group. That Phase 4 movie is generally assumed to have occurred in 2024, thanks to Thor dating his relationship with Jane Foster.

As the MCU extends a few years into our future, it’s reasonable that the Holiday Special takes place in Christmas 2025, a year after we last saw Groot in the chronology. Groot looks a lot bigger than the last time we saw him, although, at one point, Kraglin mentions to surprising guest-star Kevin Bacon that Groot is still “just a kid.”

Marvel hasn’t revealed how fast everyone’s favorite plant-based character ages, but it seems that Groot ages at about double the speed of a human. As Groot was a baby in 2014, he was designated an adolescent in the post-credits of Guardians of the Galaxy Vol. 2. Since then, he’s been tearing through his teenage years. As the Holiday Special is set about nine years after his birth, Groot is the equivalent of a 19- or 20-year-old.

It’s not an exact science, and Gunn has previously left the door wide open by explaining that while Groot ages faster than humans, the speed isn’t consistent.

The result in the Holiday Special is a late adolescent, slightly awkward Groot. His body’s filling out like the adult we met in 2014, although his broad face still looks young. He’s undoubtedly bulking up, but he may retain his youthful looks for a while.

All signs point to Groot coming close to full circle by the time of Vol. 3, although there’s no sign he’ll follow his comic book form by saying anything else than his familiar refrain — at least to our ears.
While Groot may have gotten better at cleaning his room now, the Holiday Special post-credits scene shows he’s not rebelling from being the passive butt of the joke any time soon.