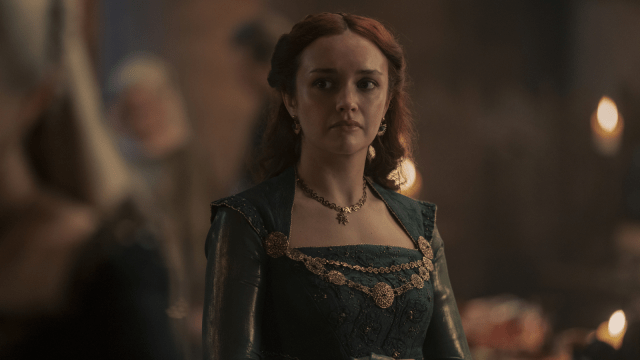 Warning: the following article contains spoilers for House of the Dragon

The finale to season one of House of the Dragon ramped up the tensions between the Greens and the Blacks to the point of no return, and has left everyone waiting with bated breath to see what comes next.

There were also some notable character absences during the events of the finale, which was an extremely Rhaenyra-heavy episode. The only Hightower presence during the episode titled “The Black Queen” was when Otto (Rhys Ifans) appeared to offer terms of surrender to Rhaenyra (Emma D’Arcy) and her loyalists.

This may seem strange to some viewers, considering this is a fairly one-sided perspective on the war that we’ve been ramping up to all season long. Which begs the question: where was Alicent (Olivia Cooke) while all of the events on Dragonstone unfolded? Why was she sidelined? We have a few thoughts on the matter.

The simplest and most straightforward answer was Alicient was off in the background, presumably in King’s Landing getting herself a change of underwear along with the rest of her family after the near-death experience they had after coming nose-to-nose with Rhaenys’ dragon, Meleys.

As to the why, we can chalk it up to a creative decision by the showrunners. Reflecting on the series so far, the first eight episodes were a deep dive into the rising tension between the Targaryen and Hightower houses, interwoven with the steady decay of King Viserys’ (Paddy Considine) health and culminating in his death, which was the spark that started the fire.

If you recall, the focal point of episode nine “The Green Council” was the Greens and their schemes to usurp the throne. Rhaenyra didn’t get any screen time in that hour of television.

With the death of King Viserys being the catalyst to the conflict over the Iron Throne, the final two episodes of the season served as deeper dives into the two factions that would stake their claim for it, with the war between them to kick off in earnest in season two.

The specifics of what Alicent was up to during the events of The Black Queen, however, are unclear. Probably plotting her defense of King’s Landing against the Blacks. Or simply continuing to loathe her existence while Larys Strong (Matthew Needham) gets off to her bare feet in a corner.