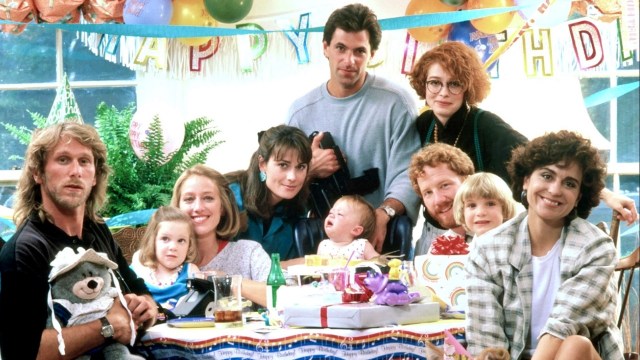 From 1987 to 1991, viewers watched as a close knit group of friends navigated life in their thirties on the popular, yet not-so-subtly titled drama, thirtysomething. The show aired on ABC on Tuesday nights at 10 o’clock, and gained a generous following of devoted fans over its four-season run.

Set in Philadelphia, Pennsylvania, the series followed the life of married couple Michael Steadman and Hope Murdoch, who along with their friends Gary and Susanna Shepherd, Elliot and Nancy Weston, Melissa Steadman, and Ellyn Warren, deal with all the social political  changes that defined America in the 1980s, all while managing their personal, interconnected lives.

The highly influential drama set the tone for many other shows that would come after, and the cast have continued to enjoy much success years after. Here’s what the men and women of Thirtysomething are up to these days.

Even though he had become somewhat of a household name in the early 80s, with roles in Hill Street Blues and Falcon Crest, it was his role in Thirtysomething that solidified Ken Olin as a mega television star. Olin directed a few episodes of the drama, and has since gone on to direct several notable television shows, particularly Alias, Brothers & Sisters, and This Is Us, the latter of which earned him multiple Emmy nominations. For his role as Michael Steadman, he was nominated for the Golden Globe Award for Best Actor — Television Series Drama in 1990.

While none of her endeavors have managed to match the success of Thirtysomething, Mel Harris has stayed quite busy, and headed the sitcom Something Right from 1996 until 1998. The actress is taking some time off acting at the moment, and hasn’t been seen since an appearance in the indie film, King of Knives.

Peter Horton starred as the womanizing literature professor who eventually falls in love and becomes a stay at home dad. Horton has also been out of the public eye for some time, with his last appearance in the pilot episode of the medical drama New Amsterdam. He is doing just fine behind the scenes as well, and is an executive producer of the long-running ABC drama, Grey’s Anatomy.

For her role as Michael’s cousin, Melissa Steadman, Melanie Mayron won the Emmy Award for Outstanding Supporting Actress in a Drama Series. Like many of her co-stars, she made a successful leap into directing, and has directed episodes of many successful projects, including: Pretty Little Liars, Switched at Birth, Jane the Virgin, and Dynasty.

Patricia Kalember has enjoyed many recurring and guest roles in successful television shows over the years, the most notable being Blue Bloods, Gossip Girl, Orange is the New Black, The Tick, and Madam Secretary. Her most recent appearance was in the Power sequel, g, where she reprised her role as Kate Egan.

After recurring nominations at the Emmys, Timothy Busfield won the award in the show’s final season. He starred as the rebellious Elliot Weston, a role that won him critical acclaim. From the stage to the screen, Busfield has kept quite busy since the wrapping up of Thirtysomething, and the actor also founded a non-profit Arts organization named Theatre for Children, Inc. Much like his co-stars, he caught the director’s bug, and worked behind the scenes for a variety of shows, including: Lizzie McGuire, This Is Us, Nashville, Designated Survivor, Psych, and a host of other popular projects.

Patricia Wettig received unanimous acclaim for her portrayal of the troubled, yet determined Nancy Weston. She earned three Emmy Awards for her breakthrough performance, as well as a Golden Globe Award. Since then, she has slowed down her work pace, although she picked it back up for a recurring role in Prison Break, and long-running role in Brothers & Sisters. A television star, Wettig has not been in any theatrical film releases since the 90s, save a cameo in The Naked Brothers Band: The Movie.

Thirtysomething marked the breakthrough for actress Polly Draper, who starred as Ellyn Warren, a local politician and friend to the group. She is the creator of the popular Nickelodeon musical comedy, The Naked Brothers Band. She hasn’t been seen much on-screen since her Emmy-nominated performance as Ellyn, but continues to guest star in smaller projects, and gained stellar reviews acting alongside her sons Alex and Nat Wolff in Stella’s Last Weekend.