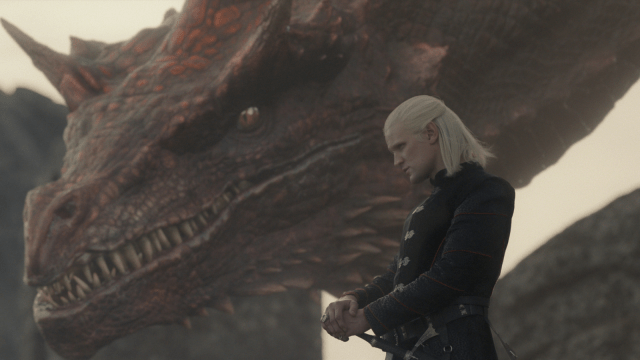 Warning: the following article contains spoilers for the House of the Dragon season one finale

House of the Dragon’s season one finale The Black Queen has laid the groundwork and put all of the pieces in place for the Dance of the Dragons to kick off in earnest during the events of the second season.

This is your second and final warning that we’re about to go into spoiler territory, so proceed at your own risk, or get burned.

The Hightowers have usurped the Iron Throne by crowning Aegon II as the new king, Queen Rhaenyra is now seeing red following the absolute disintegration of her son Lucerys by the teeth of Aemond’s dragon Vhagar – and the stage is set for things to get really messy.

One detail from the finale that was a little more innocuous, however, was a scene in which we saw Daemon entering a spooky cavern by torchlight singing a soothing Valeryon tune. Out of the shadows emerges an enormous beast of a dragon, sending an impressively lengthy plume of fire into the air as Daemon interrupts its nap time. So who is this new fearsome beast?

Vermithor’s former master was Jaehaerys Targaryen, grandfather to our dearly departed fan-favorite peacekeeping king Viserys. Following the death of his master, Vermithor did not take on a new rider, but it seems Daemon is now trying to change that.

Daemon already has Caraxes as his dragon, so it appears that someone else will need to rise to the occasion to tame the beast. The source material Fire and Blood does offer up the revelation of who Vermithor’s new rider will be, should you choose to read ahead.

Around the war table, Daemon recounts how many dragons each side has in their possession – the Greens have four, while the Blacks have thirteen, granted some, including Vermithor, are riderless. Verimithor, also referred to as The Bronze Fury, is one of the largest fire breathers in play – bested only in size by Aemond’s dragon Vhagar, so it will be a key strategic pawn in the war to come.