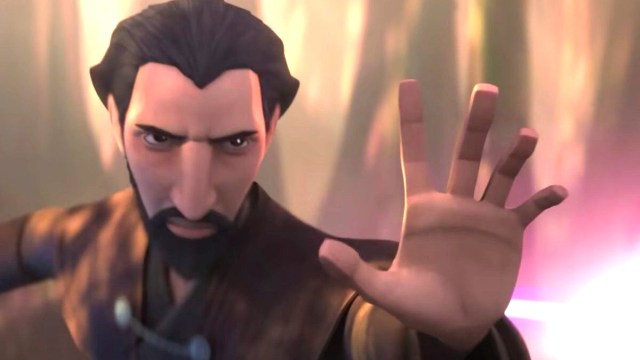 The ever-expanding animated side of the Star Wars universe just got even bigger this week with the release of the six-part first season of Star Wars: Tales of the Jedi. This miniseries revisits a time before the Clone Wars and examines the origins of two of the most famous Jedi of the era, albeit two who took very different paths in life: Anakin Skywalker’s future padawan, Ahsoka Tano, and the Emperor’s one-time apprentice, Count Dooku.

Dooku was one of the most memorable villains introduced in the prequels. The part was created especially for Christopher Lee as the character’s name is an obvious allusion to Lee’s iconic turn as Count Dracula. With the Lord of the Rings legend having passed away back in 2015, naturally Dooku is played by someone else these days, but who voices the wayward Jedi in Tales of the Jedi, and where have you heard him before? Let’s find out.

Who replaces Christopher Lee as Dooku in Tales of the Jedi?

Tales of the Jedi features an all-star cast of returning Star Wars favorites. Ashley Eckstein reprises Ahsoka once again, as does Ian McDiarmid in yet another cameo as Sheev Palpatine. Meanwhile, The Mandalorian director Bryce Dallas Howard lends her voice to long-lost character Yaddle while Liam Neeson and his son, Micháel Richardson, share the role of Qui-Gon Jinn.

As for who plays Dooku, it’s veteran voice performer Corey Burton. While Lee is obviously indelibly linked to the character, Burton has actually played the villain on far more occasions than Lee ever did. Burton has embodied the Count ever since 2003’s Clone Wars 2D-animated series, continuing the role in the more famous CG-animated The Clone Wars and numerous video games.

Dooku isn’t Burton’s only iconic Star Wars gig. He’s also the voice of notorious bounty hunter Cad Bane. Debuting in The Clone Wars, Burton recently reprised Bane in both The Bad Batch and in the character’s live-action debut in The Book of Boba Fett finale. Burton’s tones can likewise be heard in The Clone Wars as Ziro the Hutt, Jabba’s equally nasty uncle.

Outside of the Star Wars universe, Burton is a bona fide Disney legend as he has lent his distinctive voice to countless Mouse House productions ever since the 1980s, including everything from The Lion King to The Incredibles and Chip ‘n Dale: Rescue Rangers (both the original series and the recent movie). Elsewhere, he is also known to DC fans for playing Brainiac in the DCAU and Hugo Strange in the Batman: Arkham games.

Star Wars: Tales of the Jedi is now streaming on Disney Plus.