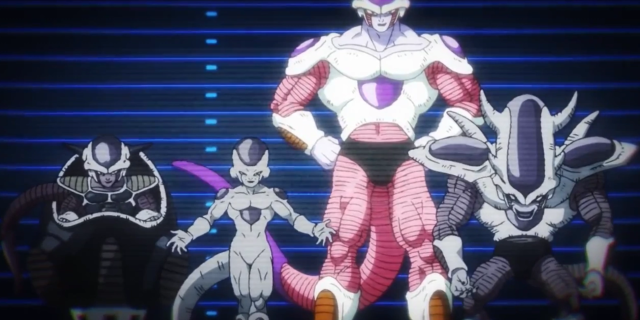 Frieza is one of the most famous and popular characters in the Dragon Ball franchise. The character has been a franchise staple since he debuted in the 247th manga chapter, Dark Clouds Swirl Over Planet Namek, in 1989. Like most characters in Dragon Ball, Frieza has access to several different forms of varying power. However, what makes Frieza stand out is that his forms don’t work in the same way forms do for other characters.

Here is everything you need to know about Frieza and his forms.

Frieza’s father, King Cold, is a mutant with a very high power level. This is passed down to his son, making Frieza unique out among others of his kind. In fact, Frieza is said to be so powerful that he has already surpassed his father’s power level at the moment of his birth.

Frieza is responsible for destroying Planet Vegeta, believing that this would prevent the Saiyans from rebelling and stop the myth of the legendary Super Saiyan from coming to fruition. His quest to find the Dragon Balls and achieve immortality causes him to encounter Goku, which sets off their long and storied rivalry, pulling him into the franchise’s massive core plot.

How do Frieza’s forms work?

Frieza’s forms are slightly different from the forms that other characters in the series have. While others in the Dragon Ball franchise transform to boost their power, Frieza’s transformations reduce his power.

Despite being born with immense power, Frieza often struggles to control himself. And, knowing this could cause harm to those around him, Frieza starts to transform to reign in his power. Thus, his original fourth form is his True Form. Giving him access to his full potential power. However, this comes with the downside of Frieza having to work hard to maintain control. He is always at risk of losing control and going on a mindless, planet-destroying rampage. However, after the Future Trunks saga, Frieza learns how to control his power, allowing him to use his True Form without issue more often.

What Are Frieza’s forms?

Frieza’s first form is his first suppression form, designed to reduce his power massively. In this form, Frieza looks like a child. This form has changed during Frieza’s life as in flashbacks to Frieza’s childhood, he has some slightly different details and is a brighter pink color.

Second Form allows Frieza to tap into more of his power. This form is taller, towering over most of the Z-fighters. It is also bulkier with more prominent horns and a deeper, more adult voice. Interestingly, this form looks like King Cold, leading to many fan questioning how other members of Frieza’s race handle their forms.

In Third Form, Frieza’s skull extends and his torso grows bulkier as his face forms a beak. Due to his hunched-over posture, this form is often said to resemble a Xenomorph from Alien, and it’s easy to see why. This form is super powerful as Frieza uses it to destroy a fusion of Nail and Piccolo.

A form that gives Frieza access to all of his potential, this form, sometimes nicknamed Super Frieza, looks a lot like Frieza’s first form, but sleeker. His whole body becomes smooth and white, and his voice returns to its more child-like tone. However, even when using a fraction of this form’s power, Frieza struggles to control it.

This form is considered a sub-form of the Final Form. When Frieza tries to tap into 100% of his power he grows in size becoming more muscular, looking almost like a white version of the Hulk. While transforming into this form he becomes taller and broader. This makes him look very bulky, but also distorted, giving the viewers a visual representation of how hard it is for Frieza to retain control during this transformation.

However, the idea of this form has become less relevant as Frieza’s later forms further increase his power, turning this form into Frieza’s current base form.

Mecha Frieza, also called Powered-Up Form in some media, looks like Frieza’s final form with a load of cybernetic augmentations. This form isn’t achieved via transformation. Instead, Frieza only gets it after he is killed. King Cold gathers what remains of Frieza’s body and forces some scientists to rebuild it with robot parts. While it is said to be stronger than Frieza’s other forms, Frieza doesn’t get to show off the limits of this form.

This form looks like a bright yellow version of Frieza’s final form but, according to stats, it is actually slightly taller than that form. Frieza gains this form while training for his rematch with Goku. In Dragon Ball Z: Resurrection ‘F,’ Frieza’s dialogue heavily implies that he consciously decided on this form’s appearance and chose the color himself, making it stand out among other forms.

This form is more powerful than Frieza’s final form, even holding its own against Super Saiyan Blue Goku. In fact, it is so powerful that Beerus, the god of destruction, praises it for its power. However, this form has a massive downside. It quickly eats up all of Frieza’s stamina and forces him to revert to his Final Form, meaning opponents can simply wait him out.

Just when you thought Golden Frieza couldn’t get more dangerous, Rage Mode Golden Frieza enters the picture. When Frieza gets very angry, he can channel that anger into pure power and enter this form, further boosting his potential.

Debuting in chapter 87 of the Dragon Ball Super manga, The Universe’s Strongest Appears, Black Frieza looks like Frieza’s final form with the purple sections replaced with black ones.

Frieza achieves this form by using a Hyperbolic Time Chamber to train for 10 years, becoming even stronger than Golden Frieza. This form can knock out True Ultra Instinct Goku and Ultra Ego Vegeta without breaking a sweat.

Only seen during the New Space-Time War Saga, this is a version of Frieza fused with the One-Star Dark Dragon Ball. This gives Frieza immense power but turns him into a mindless husk. This Frieza can access a unique form of Golden Frieza, dubbed Xeno Golden Frieza.