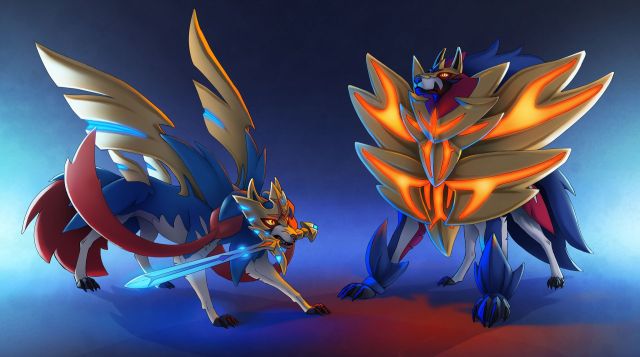 via The Pokemon Company and Nintendo

The anime features a variety of birds, aquatic creatures, insects, cats and even man’s best friend – dogs. King among the four-legged fur balls are wolves – exotic, fearsome and beautiful creatures. Pokémon also features several varieties of wolves.  With so many to choose from, there is bound to be at least one that you can’t resist.

These Pokémon don’t play around. They may be cute, but they pack a punch in the games and anime. Today we’re counting down Pokémon’s best wolves.

Don’t let this adorable puppy fool you – he’s a wolf pup and will tear a person up with its sharp rocks. As its name suggests, Rockruff is a rock type Pokémon. It was introduced in Pokémon Sun and Moon’s Alola Region.

As the wolf pup grows it becomes violent and aggressive, with multiple forms possible depending on the time of day it evolves.

Manectric is an electric type Pokémon introduced in the Hoenn Region of Pokémon Ruby and Sapphire. His mega form is introduced in Pokémon X & Y. Its mega evolution is granted the ability “Intimidate” and is granted a large boost in speed and special attack.

His body is mostly light blue with golden fur spiked on its head, sides, and front paws. In the Kalos Region, Officer Jenny uses Manetric as her police dog instead of the standard issue Growlithe.

Mightyena is a dark type Pokémon with luxurious silvery grey and black fur, and piercing red eyes. If a trainer is good, Mightyena recognizes the trainer as its alpha and will obey him or her.

Mightyena was introduced in the Hoenn Region of Pokémon Ruby and Sapphire.

Based on a combination of canines and felines, the Legendary Beasts or Legendary Dogs, as they’re sometimes called, include Entei, Raikou, and Suicune. Legend says the three Pokémon were regular Pokémon, before the tower they lived in was struck by lightning and all three perished in the ensuing flames. Ho-Oh flew overhead, causing rain to sweep across the area, and gave its gift of life to the three creatures, reviving them as the three Legendary Beasts. Echoing the fire that killed them, each represents a unique part of their tragic beginning.

Raikou represents electricity, like the lightning that struck their home. It has golden fur covering its body and a lightning bolt-shaped tail.

Entei represents fire, and its colors embody what a fire looks like, with a brown furry body, red and gold fur around its face, and grey fluffy fur on its back, which resembles smoke billowing up from the flames.

Suicune represents wind and rain, like the rain that swept over the area and extinguished the flames. It is the calmest of the three Legendary Dogs.

Although it resembles a lion, Arcanine is considered a dog or wolf. The extremely loyal Pokémon first appeared in Pokémon Red and Blue. It appears in the anime as Officer Jenny’s police dog, along with its pre-evolution Growlithe.

Arcanine is a fire-type Pokémon based on the Shisa dog in Chinese lore, meant to protect people from evil.

Absol is a dark-type Pokémon introduced in Pokémon Ruby and Sapphire. Due to its ability to sense upcoming natural disasters, it unfairly earned the nickname “bringer of doom”.

Absol can mega evolve in Pokémon Omega Ruby and Alpha Sapphire. The beautiful white and blue wolf first appeared in the anime during the Pokémon: Jirachi – Wish Maker movie.

This bipedal evolution of Zorua first appeared in Pokémon Black and White, as well as Pokémon: Zoroark – Master of Illusions in the anime movie. It has recently also made its appearance in Pokémon Journeys, the most recent Pokémon anime series.

Lucario is a fighting/steel type Pokémon and one of the few bipedal Pokémon in the games and anime. It made its game debut as the guardian of the blue gem in Pokémon Ranger: Shadows of Almia, and its anime debut in Pokémon: Lucario and the Mystery of Mew.

In Sword and Shield … Legends Awaken, Ash’s Riolu evolves into Lucario during its battle with Chairman Rose. Lucario is believed to be the first Pokémon to discover a mega evolution. In the anime, Ash’s Lucario evolves into its mega form during a battle with Bea’s Gigantamax Machamp in A Battle of Mega Versus Max.

The legendary Pokémon known as the guardians of the Galar Region are Zacian and Zamazenta. They were asleep and believed to be legends until they were awakened in Pokémon Sword and Shield.

Like knights standing watch over a kingdom, Zacian wields a sword from its mouth, while Zamazenta’s chest fur resembles a shield. The two legendary Pokémon are believed to represent King Arthur’s sword and shield, as the Galar Region represents the United Kingdom.

This rock-type Pokémon is based on werewolves. It has three different forms – Midday, Dusk, and Midnight. Midday and Midnight Lycanroc forms premiered in Pokémon Sun and Moon, while Dusk Lycanroc was added in Ultra Sun and Ultra Moon.