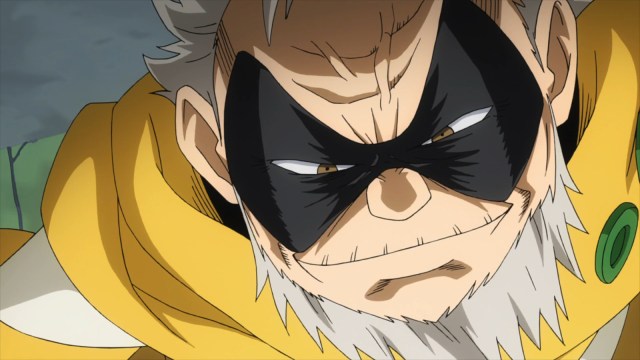 In episode eight of My Hero Academia‘s current season, “League of Villains vs. U.A. Students,” multiple heroes team up to face the series’ overarching antagonist. Now in possession of All for One and attempting to steal Deku’s One for All, the villain is more powerful than ever. Even with Aizawa’s eyes constantly on him that impede Shigaraki from using his Quirks, the villain is putting up a good fight, dealing damage where he can.

One of the most recent victims of Shigaraki’s power is Gran Torino. Despite his lighting fast movements, the elderly hero is outmatched by Shigaraki, leading many viewers to question his vital status.

Is Gran Torino dead in My Hero Academia?

During the Paranormal Liberation War, Gran Torino suffers severe injuries. In order to stop Shigaraki from dealing an attack on Endeavor — which could have ended badly due to the number one hero’s weakening power — Gran Torino makes the first move, smashing into Shigaraki from behind. This comes back to bite Torino, though, as Shigaraki uses the close proximity in his favor, and grabs the elder by the foot, promptly breaking it with brute strength alone.

In quick succession, Shigaraki makes use of his hold on the hero to crash him to the ground. As Gran Torino reflects back on his and Nana’s decision as well as the succession of events that lead to Shigaraki becoming who he is now, the villain deals the final, gruesome blow. Shigaraki punches the elder in the stomach with such power that blood explodes from Torino’s body while the ground beneath him is crushed.

The heroes who witness the scene are helpless to do anything about it, and Shigaraki quickly moves on to his next target. This is the last we see of Gran Torino during the episode. Luckily, the manga provides all the necessary answers, so we can confirm that in spite of the severe injuries Gran Torino accumulates while battling Shigaraki, he survives to see another day.

After the war, All Might’s mentor is hospitalized and is in very poor condition, but alive nonetheless. In one of Deku’s visits to the hospital, Gran Torino gives him the tattered yellow cape he wore as a hero, but since then nothing else has been revealed about his current condition. Without confirmation of the elder’s death, it’s assumed that he remains alive to this day in the manga.

Not all heroes are as lucky as Gran Torino, though, so keep watching. All of My Hero Academia‘s seasons are available for streaming on Disney Plus, Hulu, and Crunchyroll.