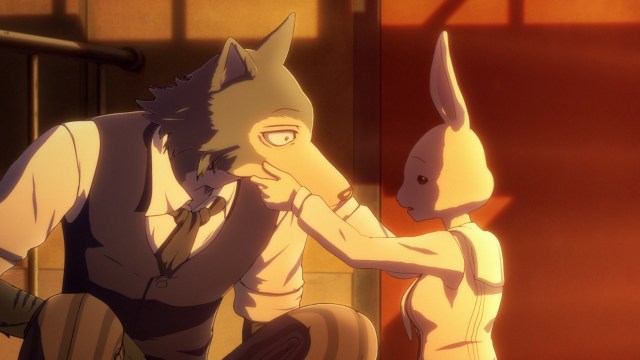 It’s official: Beastars is returning for a third and final season. Originating as a hugely profitable manga series in 2016, Beastars was conceived, written and illustrated by Paru Itagaki, the daughter of esteemed manga artist, Keisuke Itagaki. Just three years later, Beastars was developed into a coming-of-age drama anime that was distributed by Netflix and has since aired two successful seasons.

Set in a civilized society where carnivores and herbivores coexist, Beastars follows several anthropomorphic animals; Legoshi, a gray wolf; Haru, a dwarf rabbit; and Louis, a red deer. When a herbivore is murdered at Cherryton Academy, the students are on high alert with a cold-blooded killer amongst them. Meanwhile, Legoshi tries to tame his own predatory instincts after developing complex feelings for Haru.

From the moment it begins, Beastars is covered head-to-tail with memorable moments. In fact, there isn’t a dull moment to be had. However, the limitless possibilities make for a difficult ranking, so let’s do our best to narrow down the most impactful events from Beastars‘ twenty-four episodes.

In the opening minutes of Beastars, a shocking event sets off a wave of unease and distrust among the carnivores and herbivores and acts as the central plotline throughout the series. It’s a significant moment that fuels the underlying murder-mystery theme and maintains high tensions between the characters. Even after discovering that Riz murdered his best friend Tem, audiences are torn between pointing fingers at Riz or cherishing flashbacks depicting a genuine companionship between different species — an unthinkable concept in Beastars.

It’s one of the first times that Legoshi and Haru interact, which automatically makes it memorable. However, it also marks the beginning of Legoshi’s obsession/infatuation with Haru. From that moment on, Legoshi tries to differentiate between romantic feelings for Haru and the predatory urge to devour her. While the heart-stopping scene is shrouded in darkness, Legoshi’s blood-red eyes — indicating the absence of a rational mind — glare ominously through the night. This moment becomes Legoshi’s dirty little secret, despite Haru having a hunch that it was him all along. There’s an added tension between Legoshi and Haru as both of them fight off their urges.

Easily one of the most hilarious scenes in Beastars, Haru’s promiscuous nature comes to a head after she and Legoshi meet in private at the garden club. Mistaking his intentions for meeting with her, Haru begins to undress. Likewise, she unbuckles Legoshi’s trousers and remarks that the cream-colored fur on his stomach matches that on his snout. Legoshi, inexperienced in that department, panics and flees. It’s humorous, light-hearted and somewhat endearing, but Legoshi and Haru both mature as individuals during the short encounter.

7. Haru gives in to her instincts

Legoshi and Haru’s relationship is built on trust, especially after Tem’s murder had Cherryton Academy in a full-on frenzy. While their initial sexual encounter didn’t go as planned… neither did their second. After rescuing Haru from the Shishigumi, Legoshi is invited to spend the night in a hotel room together. He reluctantly accepts, then sparks fly as Legoshi and Haru build towards having sex. However, unable to resist her instincts as natural-born prey, Haru’s body involuntarily tries to force itself into Legoshi’s mouth to be devoured. It goes without saying that Haru’s actions are an immediate buzzkill, but it reminds us that Legoshi and Haru are polar-opposite species and don’t conventionally belong together.

Louis undergoes the biggest character arc in the whole of Beastars. Starting out as a goody-two-shoes Beastar candidate, Louis soon develops a thick-skinned and ruthless personality after replacing Chief Lion — whom he murders in cold blood — as the Shishigumi’s leader. After rescuing Haru from certain death, Legoshi flees with her, leaving Louis to corner Chief Lion and hold him at gunpoint. In informal terms, Louis confronting Chief Lion is the most badass scene in Beastars, made especially rousing by Louis’ merciless dialogue: “Now I want you to beg me for your life. You’re going to show me how a carnivore fears for their life. So let me hear you!” Did anyone else get chills just now?

5. Legoshi finds a respect for life

While Legoshi trains under Gohin, his mind and body endure emotional and physical strain as he resists the urge to consume meat. Hoping to encourage Legoshi to rethink his choices and gain a better understanding of the food chain, Gohin instructs him to eat an insect larva, which would have otherwise underwent metamorphosis to become a moth in later life. After eating the bug, Legoshi experiences an epiphany wherein he speaks directly to the moth’s spirit. The moth urges Legoshi to find a respect for life, especially as herbivores are consumed to make carnivores stronger. Legoshi learns that he can consume meat in moderation so long as it serves a purpose, rather than just mindless murder. Essentially, the moth teaches Legoshi that herbivores should never suffer in vain.

One of the biggest jaw-dropping moments in Beastars comes after Louis trials as the newly appointed boss of the Shishigumi. Before the lions agree that Louis belongs with the Shishigumi, he must prove his allegiance with carnivores by effectively becoming one and consuming buffalo meat. The Shishigumi describe the test as fostering “this potential friendship by enjoying a meal together” and “familiarizing [Louis] with the Shishigumi’s way of life.” Louis’ dilemma is heightened by the vibrant swirls of red and blue, which indicate a pre-existing hunger — present in all animals — battling an intuitive urge to repel all foreign forms of food. In the end, Louis eats the meat, despite vomiting shortly afterwards, but his outlook on life changes drastically from that moment onwards. Like Legoshi, he too experiences insight and embraces the inevitability of his status as an herbivore.

When Haru is kidnapped by the Shishigumi and assessed for adequacy before becoming Chief Lion’s latest succulent meal, she sits alone and writes out a short memoir before her demise. In the monologue, Haru describes her life as meaningless, uneventful and forgettable. She laments for wasted time and a loveless, insignificant existence. She wonders if — upon her death — anyone would come for her, mourn for her or even remember her. Haru recalls how she was a born a fragile creature devoid of power, status and significance, serving only the purpose to lay down her life and nourish others. It’s bold and beautiful, delivered with unshakable resolve from both Lara Jill Miller (Haru’s voice in the English dub) and Sayaka Senbongi (Haru’s voice in the Japanese dub).

All roads lead here. In the climactic battle between Riz and Legoshi, our valiant gray wolf emerges victorious. During the fight, which evokes some mixed emotions, Riz mourns the loss of Tem, while Legoshi blames Riz for inciting a divide between herbivores and carnivores. Riz admires how Legoshi was able to form a long-lasting and genuine friendship with an herbivore in Haru, and for the first time, both Legoshi and Louis listen to Riz tell tales of sorrow, acknowledging that while his actions were unforgivable, his loneliness would have been devastating. Louis remarks that Legoshi wouldn’t be the last carnivore to change his life, Riz admits fault in murdering Tem, and Legoshi finds inner peace at last. The whole scene is — in a word — breathtaking.

As mentioned, before fighting Riz, Legoshi understands that eating meat should be a privilege in moderation and with the utmost respect for the suffering of others. Before fighting Riz, Legoshi encounters Louis, who — to erase his traumatizing past as intended livestock for the black market — asks Legoshi to eat his right foot, which was branded with a ‘4’ (his livestock number) when Louis was younger. He informs Legoshi that eating his foot will give him the physical strength needed to defeat Riz. Legoshi agrees, although apprehensive at first, but the whole scene is significant to the full-circle effect of carnivores and herbivores accepting their respective responsibilities as predator and prey.

There are so many more moments that we could have included, but these are the most emotional and noteworthy scenes in the entire anime, which will return for its final season in 2024.