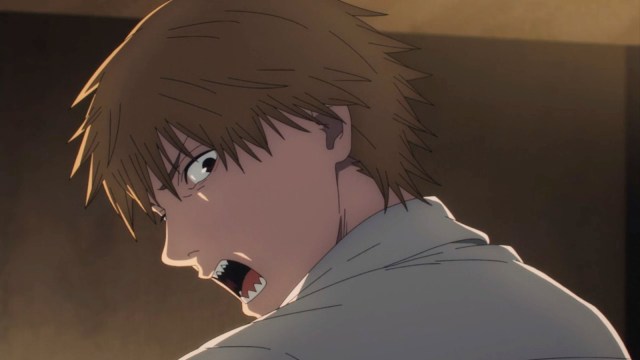 Warning: the following article contains spoilers for Chainsaw Man season one, episode seven, “The Taste of a Kiss.”

Denji’s powers in Chainsaw Man are tremendous, but a battle against a powerful devil just caused Denji to level up in a big and kind of sickening way.

Episode seven, “The Taste of the Kiss,” picks up right after the previous episode. Denji has just thrown himself in front of a knife to spare Aki’s life. Denji and Division 4 have been stuck inside Hotel Morin at the mercy of the Eternity Devil who’s offered them the opportunity to leave if they kill Denji. Arai and Kobeni cracked under pressure and tried to end Denji’s life, but he didn’t go down that easy. He figured out that the Eternity Devil was afraid of him and he wanted to use that to his advantage.

Denji jumps down the elevator shaft and into the Eternity Devil’s multiple mouths. He chainsaws away, slicing the devil’s innards with his chainsaw, and the Eternity fights back with its intestines whipping back at the young man. The devil goads him, telling Denji that he’ll never find his heart, and the battle is relentlessly challenging for Denji. Denji loses too much blood and his chainsaws begin to retract. He falls to his knees, and Himeno has to use her Ghost Devil to pull his chord for the chainsaws to rev up again.

Himeno considers him the craziest person she’s ever met, and she realizes that he just may have what it takes to defeat the Gun Devil, the main devil Division 4 is searching for. In a flashback, she learns from her master, a blond man with a scar on the left side of his mouth that devils fear are the ones with a couple of screws loose, and Denji certainly fits this bill.

After the fight, Division 4 walks out of the hotel, bruised but victorious, with the piece of the Gun Devil flesh they went in for. Aki and Denji are taken to the hospital, and Arai and Kobeni must return to the office to check-in. They’re nervous because they were fearful of the devil and they tried to kill Denji, when it was Denji who saved their lives. Thankfully for them, Denji isn’t one to hold grudges and he lets it go.

We’ll have to see if Denji’s perpetual motion machine technique will be used in the future. it could be used to help defeat the Gun Devil once they finally find him.