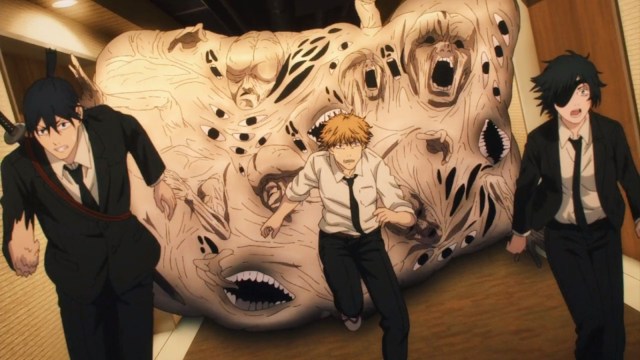 Denji has faced some fearsome devils in Chainsaw Man, but the Eternity Devil might be the most perplexing so far.

In episode six, “Kill Denji,” Aki’s Special Division 4 team is on the hunt for the Gun Devil. Their search leads them to the Hotel Morin where a devil is believed to have consumed a piece of the Gun Devil’s flesh, which they can use to lead them to the main Big Bad they’re after. The issue is that when they’re inside the hotel, odd things start happening. They’re stuck on the eighth floor, the windows don’t go anywhere, rooms only lead to other rooms, the clocks have stopped, and the elevator is inoperable. They even try to break through the ceiling, and they still end up back where they began.

The team puts their heads together, but they don’t get very far. Devil Hunter rookies Arai and Kobeni aren’t handling it especially well either. They gather the food left by guests and Aki monitors the halls nonstop, much to the concern of his partner Himeno. She reveals some details about her past with Aki who returns with news that the devil Power killed in the previous episode has transformed, and it’s much bigger now.

They go out into the hall and see that the devil that was once just a head with feet is now an enormous blob with many faces. Its actual form is a lump of sparkle in the shape of the number eight, and it has an eye and mouth on either side and two mouths in the center. The Eternity Devil has the ability to produce flesh with many arms and heads fused together in an endless supply of horror. It offers a contract if they give up Denji, and it will let everyone else go. Denji believes that it’s lying, but Himeno answers that contracts with devils must be honored or the party in breach of it will die.

The Eternity Devil represents the fear of eternity, and it works on the rookies. Kobeni’s fear grows throughout the episode, and Himeno reminds her that fear will only make the devil stronger. Arai holds it together at first, but he eventually lets fear take hold of him, and he has a panic attack in his room. Both of them empower the Eternity Devil because they’re incapable of remaining strong in this eternal hotel. Aki is unable to summon the Fox Devil because they’re cut off from the rest of the world.

In the hallway, Aki, Himeno, and Denji confront the Eternity Devil. It tells them that this form isn’t part of its main body, and they’re inside of his stomach. The only way to defeat him is to destroy his heart, which isn’t there. The Eternity Devil takes pleasure in the fear of others and shows its hubris by mocking them with this information. It supposedly doesn’t have any weaknesses on the eighth floor. Himeno uses the Ghost Devil, and she’s able to harm it with those ghostly hands, but not enough to take it down. Here, its powers are nigh infinite. Division 4 is running out of options, and time is running out fast.

After growing bigger and chasing the Devil Hunters through the hallway, they come to the elevator shaft where the Eternity Devil’s large mouths wait for Denji to fall in. Aki offers to use his sword to kill the monster once and for all, but Himeno won’t let that happen. Using the weapon will take off a large portion of his life, and she’s not willing to make that sacrifice. She uses her Ghost Devil powers to contain him and apologizes to Denji as Arai tackles him. Himeno runs up to him and attacks him with a knife, but Aki breaks through, jumps in front of the blade, and gets stabbed.

Denji realizes that the Eternity Devil wants Division 4 to kill him because it’s afraid of him, and he comes up with a plan. He’s going to jump into the devil’s mouth to use that fear against him and use his chainsaws to tear the Eternity Devil apart from the inside. He also doesn’t want to owe Aki, so he’s doing this to clear his life debt to him.