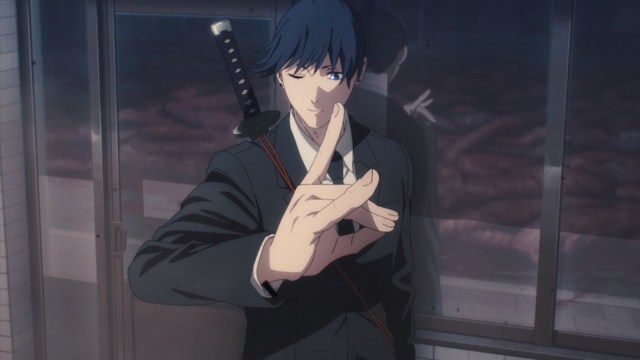 Aki Hayakawa in Chainsaw Man has a lot to complain about with Denji as his rookie partner and roommate, but at least he has a badass Fox Devil he can summon when he needs to.

In episode four of Chainsaw Man, Denji battles the Leech Devil in the street to save Power and Meowy, but he’s lost so much blood after fighting the Bat Devil that he can not fully use his Chainsaws. He’s unable to take her down and the devil uses her tongue to pierce through Denji’s torso. Right when it looks like Denji’s about to be consumed by the Leech Devil, Aki arrives with his Division 4 Public Safety Devil Hunter team to save the day.

Aki presses his ring finger and middle finger to his thumb (making the shape of a fox) and says, “Kon.” Suddenly, the gigantic Fox Devil rises and chomps the Leech Devil, freeing Denji from her hold on him. Aki’s devil asks if she can swallow the Leech Devil and he agrees to her request. It’s then covered in smoke that washes over the area and the Fox Devil, and the Leech Devil’s head, disappear.

The Fox Devil is white with multiple eyes over her body, though her full body hasn’t been depicted. She can teleport to the location of the devil hunters who made a contract with her and it disappears in smoke, but the attack isn’t effective against hybrids because she doesn’t like the taste of them.

The Fox Devil doesn’t mind killing other devils and she’s amicable with people, allowing Devil Hunters to make contracts with her. When Denji is recovering after the battle with the Leech Devil, he asks about the Fox Devil and Aki says that he has a contract with her. Aki shows Denji his bandaged arm. In exchange for power, he offers up a bit of his body as food, and this time it was his skin.

Just because Aki uses the Fox Devil doesn’t mean that he’s fond of it. He tells Denji that devils yearn for the deaths of humans, so this is more of a means to an end. Aki’s parents were killed by a devil and he still holds a grudge against them. This deal also reveals that things might not be so great for Public Safety Devil Hunters either. Denji joined them to escape his terrible life of debt and he had to sell parts of himself to cover it. These official Devil Hunters have debts of their own.

Chainsaw Man is available to stream on Hulu.