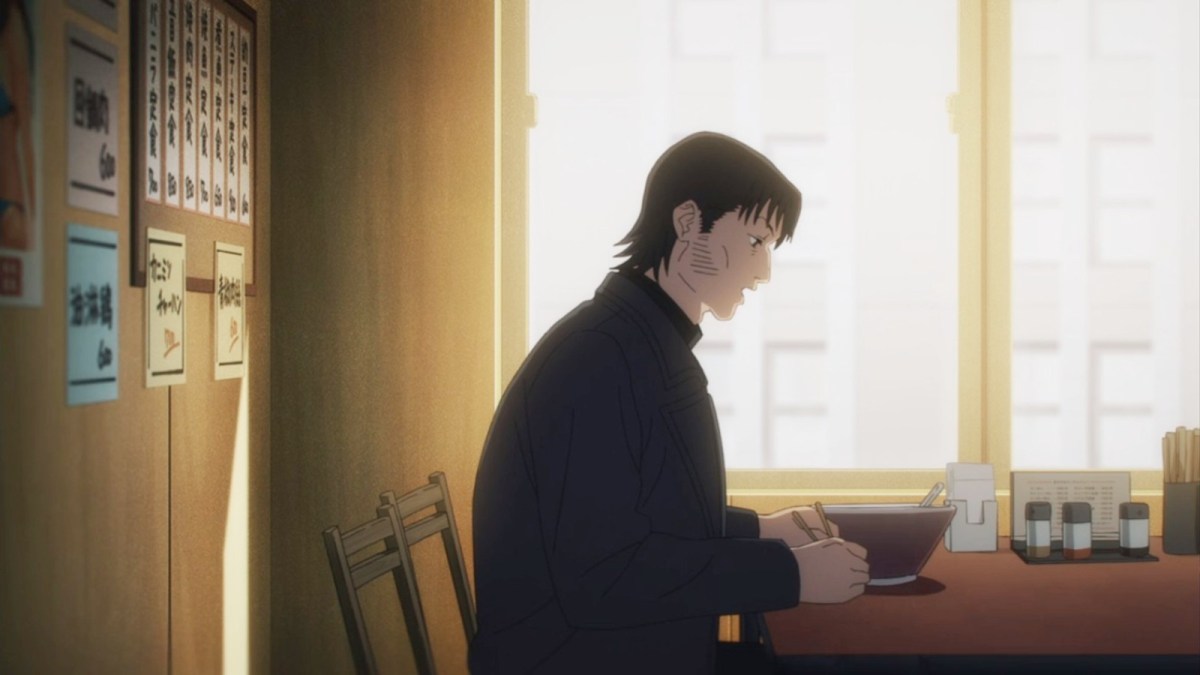 Katana Man’s introduction in Chainsaw Man has to be one of the most brutal so far, due in part because of his connection to Denji.

The morning after the dinner celebrating their victory against the Eternity Devil, Denji and Himeno discuss love. Himeno comes up with an idea to help Denji win the heart of Makima, and they form the Secret Council. They’re no longer just coworkers, they’re friends. Later, Denji, Aki, Power, and Himeno have something to eat at an establishment and are having a good conversation before disaster strikes.

In the city, people have guns in their possession and violence breaks out. The Devil Hunters hear a gunshot and it distracts them from their conversation. A man in a leather coat seated at a nearby table makes a comment about the ramen and Power takes offense to how casual he’s acting towards them. The stranger talks about how bad tastes when you’re young can mean you’ll have bad tastes as an adult, and that his grandfather used to take him to fancy places. He was in the Yakuza, but the man stressed that he was still a good guy and called him a “necessary evil.”

The man shows Denji a picture of his grandfather — the same crime boss Denji killed in the first episode, and it gets worse from there. Denji is shot in the head by the stranger and then shoots Himeno in the chest before he transforms into Katana Man, who bears striking similarities to Denji in his Chainsaw Man form. As his name suggests, he’s got katanas attached to his arms and one jutting out of his forehead and they drip with blood. Power gets close enough to uppercut him in the jaw, and Aki summons the Fox Devil who bursts through the building and devours Katana Man.

Katana Man wouldn’t go down that easy. The Fox Devil tells Aki that something outrageous is in her mouth that’s neither human nor devil and Katana Man cuts through the forehead in the devil’s eye to break free, and starts fighting Aki. Aki pulls out his special sword from the Curse Devil — the one Himeno didn’t want him to use in Hotel Morin because it would take a chunk out of his life — and cuts Katana Man three times before he’s kicked off. It seems like Katana Man might be defeated when a blonde woman in a red hoodie appears, Akane, and demands that he defeat Aki.

Katana Man partnered with Akane to seek revenge on Denji for having killed his grandfather. He merged with the Katana Devil, and he’s a human-devil hybrid, which explains why the Fox Devil made that comment about his taste of him. He tells Denji that he’s after his heart right before he shoots him, and all of these people with guns are a sign that the Gun Devil is at work. There’s a scene earlier in the episode when Makima is on a train en route to a business meeting with bigwigs in Tokyo and a gunman fires at Makima and her associate.

Aki mentions that only police officers and Public Safety Devil Hunters are allowed to have guns, making this scene even more worrisome. He’s out of his depths facing this new threat. Katana Man slashes Aki so fast that Power can’t even see his movements. He’s got increased strength, durability, speed, and a special technique called the sword-draw dash where he crouches low, then moves so fast that it looks like he’s teleporting. That’s why Power couldn’t identify him when he attacked Denji. For as powerful as he is, Akane appears to be even above him. Her pep talk gives him the strength to fight back and when she uses her Snake Devil it has deadly consequences.

This episode brings events from episode one, “Dog and Chainsaw,” back into the light. Denji was paying off his debts as a Devil Hunter for hire and working for the Yakuza. Denji’s late father’s debts were transferred to him and he was forced to work for the criminal organization. The mob boss set up a trap for Denji, transforming into the Zombie Devil to kill him, and it inadvertently turned him into Chainsaw Man when his pet Pochita made a contract with the young man and merges with his heart.

Denji had to kill the crime boss to spare his life, but that matters little to Katana Man who holds onto fond memories of his grandfather.