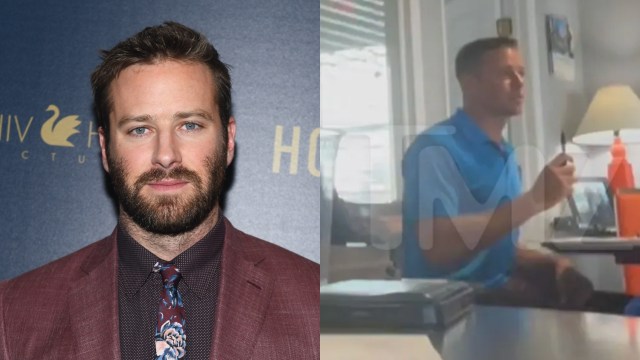 The wild ride of Armie Hammer as an actor-turned-alleged-cannibal-turned-concierge has its latest twist after he was spotted in a recent video that reveals him selling timeshare in the Cayman Islands. As if this story couldn’t get any crazier.

According to TMZ, Hammer was captured on video at Morritt’s resort, where he was conducting a sales pitch and discussing prices with a few potential buyers for a unit at the resort. Images from the video, which you can see for yourself down below, depict Hammer with a clean-shaven face while dressed in a blue polo.

Just last week, it was reported that Hammer was working at the resort as a hotel concierge, although it was believed to be nothing more than a silly rumor and was eventually “debunked” by Hammer’s lawyer Andrew Brettler. Several sources later claimed that the pamphlet, which featured a picture of Hammer on the front, was created by pranksters at the resort and that he was absolutely not working as a concierge — but we now know he’s most definitely working as a salesman.

Before he landed his newfound occupation, the Call Me By Your Name star was blacklisted by Hollywood a couple of years ago after multiple reports of assault, sadistic sex acts, and apparent cannibalism were revealed by former girlfriends. Despite the disgrace, Hammer appears to be living life to the fullest down in the Caribbean, where he has been staying since the thick of the COVID-19 pandemic.

It’s still unclear if Hammer will ever act again, with him last appearing in Death on the Nile.