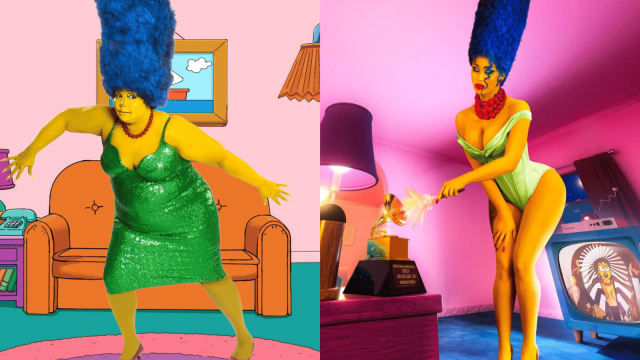 Every Halloween there’s usually been some sort of cultural phenomenon which leads to an alarming number of costume double-ups among celebrities and us common folk — whether it be Heath Ledger’s Joker or Margot Robbie’s Harley Quinn or anyone else in between, these things happen.

Marge Simpson has been part of the cultural zeitgeist for the better part of half a century now, but didn’t necessarily make waves this year. Despite that, it would still seem that some costume coordination didn’t go down in the Hollywood A-lister group chat this year, with Cardi B and Lizzo each offering their unique take on the iconic Matt Groening character.

While both are absolutely slaying and pulling their looks off, it’s still naturally time to put on our cosplay judging hats on and compare the pair, with two different approaches being taken by the stars.

Cardi B absolutely went for the ‘sexy Marge’ look, sporting high heels and a light green leotard that doesn’t leave a whole lot to the imagination, though she did don a polkadot dress for an alternative look:

Lizzo, on the other hand, went for a getup which was much truer to the character as we know her on a day to day basis, though still offering her own unique spin with a decidedly sparkly dress, and recreated beloved Marge memes in her photoshoot:

It’s certainly a tight race for 2022’s best Marge. Maybe we’ll need to hear both Cardi and Lizzo’s best gravelly Marge impression to determine who takes the crown – they can both turn to none other than Azealia Banks for inspiration:

At the end of the day, debating which rapper did the character best is a tough ask considering they both absolutely nailed their takes, but what we can offer up is all of the other celebrities that killed their looks in the spirit of Halloween.