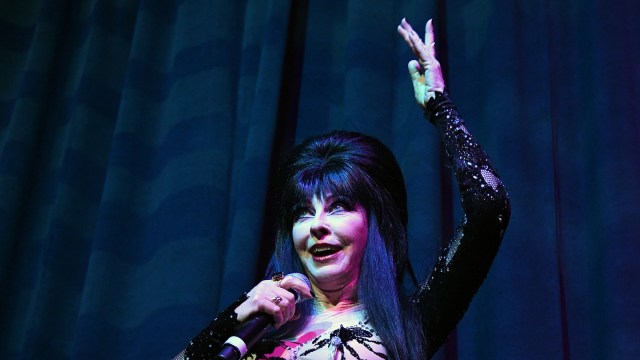 Elvira, the Queen of Halloween, joined a score of other celebrities who’ve joined the alternative social media site Mastodon now that Elon Musk is the boss of Twitter.

Elvira, whose real name is Cassandra Peterson, announced her move on where else, Twitter, saying that she’s now a part of the #mastodonmigration.

This means you can now find Peterson on the new site along with James Gunn, who recently posted an image potentially teasing a new DCEU character. Remains to be seen if the move can coax any more of the general public onto the site, but she did get a game almost canceled because of her breasts recently, so maybe.

New Twitter owner Elon Musk is aware of the exodus because he took to his own Twitter account to mock the site in a series of now-deleted tweets. Musk responded to famous New York Times columnist and economist Paul Krugman’s tweet that he was moving to Mastadon.

Musk called the site “Masterbatedone,” which is not even kind of a good portmanteau, and then he mocked Krugman’s “dirty” screen, implying Krugman had been using it for surreptitious means.

As for Peterson, she currently has two posts on the site and 105 followers, a far cry from her more than 338,000 on Twitter. She also used Twitter and not Mastodon to promote her latest book called Yours Cruelly, Elvira: Memoirs of the Mistress of the Dark.

Hachette described the book as “an unforgettably wild memoir. Cassandra doesn’t shy away from revealing exactly who she is and how she overcame seemingly insurmountable odds. Always original and sometimes outrageous, her story is loaded with twists, travails, revelry, and downright shocking experiences.”