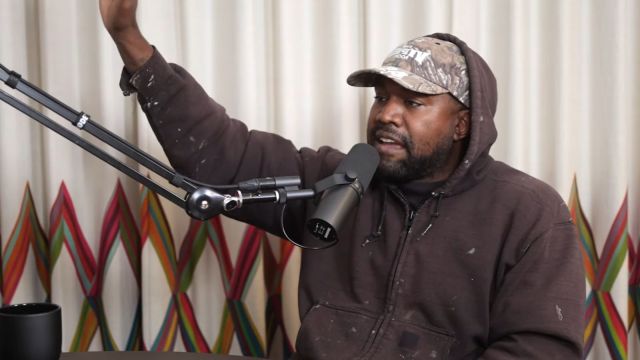 Now a glorified anti-Semitic dog-whistle machine, Kanye West has doubled down on his appalling comments with several more jabs confirming his belief in anti-Semitic conspiracy theories.

Appearing as a guest on Lex Fridman’s podcast, West was welcomed with open arms and given an entirely new platform (mostly unchallenged) to air his unhinged beliefs to millions of viewers. The 150-minute podcast saw the rapper continue his disgusting crusade against Jewish people, with West showing his true colors yet again.

Frequently talking about the “JM” (Jewish media), West seemed to have no qualms about continuing his bizarre and horrendous comments on Judaism and the far-right conspiracy theory of Jewish-controlled media.

“This is a simple thing I put: I believe that the idea of anti-Semitism and the closeness of the Holocaust is used by… certain individuals in media to not take accountability for the bad things that are happening.”

West also spoke of how his life had been controlled by Jewish people around him on where his next tour would be, his next house, and “all these decisions, and all this money” off of “controlling” him. West then says he can’t “point out the fact (???)” these people are Jewish because he’ll be labeled anti-Semitic.

Continuing to make comments such as these feel even more egregious following an anti-Semitic hate group rallying around and celebrating West’s recent comments by waving banners on a Los Angeles highway. The group even has a logo that is essentially just a Nazi Party flag slightly altered. Great job, Kanye.

West’s continued fall down into conspiracy feels almost as if he’s become a parody of himself. Balenciaga has cut ties entirely with Ye, and continued pressure is now on Adidas to sever ties.