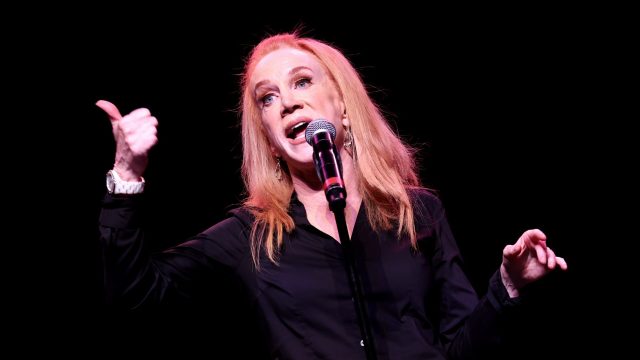 At least Elon Musk‘s tenure as “Chief Twit” hasn’t been boring. Since the billionaire bought Twitter, he’s been embroiled in controversy for sacking half the company at short notice, fought with literary giant Stephen King over plans to pay for a “verified” status, seen major advertisers pull business from the company, and is currently feuding with Kathy Griffin.

The comedian drew attention to the potential for misleading content if anyone is able to buy a Blue Tick by changing her display name to “Elon Musk”. This saw Griffin “permanently suspended” from the platform for impersonation. But, this hasn’t stopped Griffin, who simply logged into her mom Maggie Griffin’s (who died aged 99 in 2020) account to say:

Musk replied with a crack that she was actually impersonating a comedian, though Griffin quite reasonably called that out as a tired old joke.

Griffin also assured fans of the My Life on the D-List star that her mom wouldn’t have minded her taking over the account:

Musk fans quickly tagged him to let him know that Griffin was back, though given that she’s now set up shop on alternative social media platform Mastodon, we doubt another ban is going to hit too hard.

It’ll be interesting to see if any of the high-profile figures quitting Twitter in the wake of Musk’s purchase stick to their guns. New rivals are springing up, though if the failure of right-wing alternatives like Truth Social, Parler, and Gab are anything to go by, any competitors have a long way to go to challenge Twitter’s dominance.

Then again, if Twitter has many more weeks this chaotic, who knows?