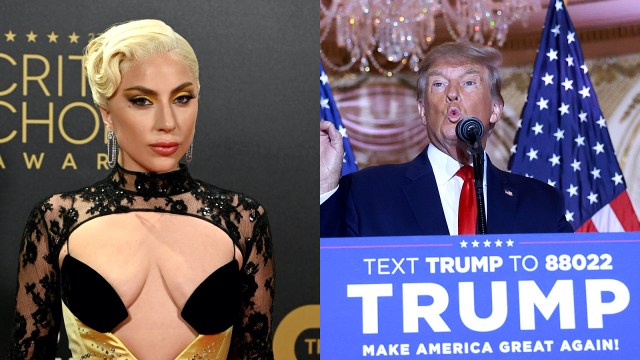 Donald Trump is running for president again in 2024 and could potentially use the slogan – get a load of this – MAGAGA. Sound familiar? It should. Aside from sounding like baby babble, it stands for Make America Great And Glorious Again, an elaboration on his previous Make American Great Again slogan of 2016. More importantly, it incorporates the name of the Mother Monster herself, Lady Gaga.

By no stretch of the imagination do we believe Trump or his team knew what they were doing when they wrote into his announcement speech “in order to make America great and glorious again, I am tonight announcing my candidacy for president of the United States.” After all, he – and by extension, them – tend to mentally block out anyone and everyone who shares an opposing opinion, which Lady Gaga fervently does. Neither does it mean Trump will use MAGAGA as his official slogan for his 2024 run, but either way the guttural term has already gained traction online, including the likes of Bette Midler who tweeted about it shortly after Trump’s announcement, saying “IT’S OFFICIAL! The new name for its campaign is #MAGAGA! Congratulations to whoever got there first, let’s take it all the way!! #MAGAGA“

No doubt Trump and his team didn’t account for Lady Gaga’s ginormous and loyal fan base when they coined MAGAGA, much of whom are now wondering if the 13-time Grammy Award-winning and Academy Award-winning artist will have something to say about the matter.

If Lady Gaga does sue Trump, it will be one of the many legal battles already facing the disgraced, twice-impeached former president of the United States. Currently, he is undergoing a thorough investigation into his role in the Jan. 6 insurrection of the U.S. Capitol. Additionally, New York Attorney General Letitia James has an ongoing civil suit against the celebrity-turned-politician for numerous fraudulent financial practices over the years. Since then, Trump has countersued James for being pernicious and malicious, the latter of which being one of his few but favorite words.

This backlog of court cases will do nothing to help Trump in his effort to regain control of the land of the free. But then again, his ever-growing list of controversies and unfavorable opinions have never stopped him from doing what he’s going to do. If Lady Gaga does sues him, and that’s a big if dependent on whether or not Trump actually uses MAGAGA, it will be little more than a tiny speed bump on his road to redemption, if such a road exists for a person like Donald Trump.

Of course, the thought of Lady Gaga ripping Trump to shreds in court? That’s the kind of stuff Grammy Award-winning songs are made of. Our paws are crossed.