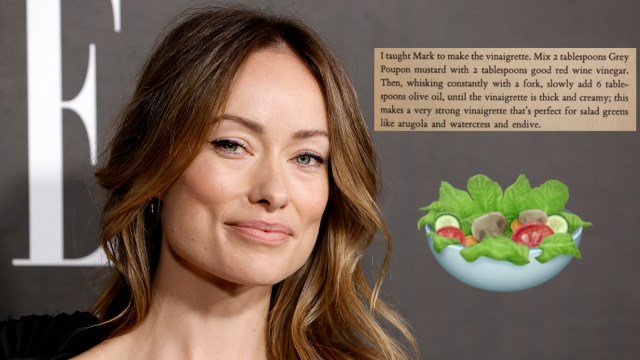 The ongoing love triangle between Olivia Wilde, Jason Sudeikis, and Harry Styles has added a new layer thanks to Wilde revealing what the salad recipe was. If none of these words make sense to you, you’re not alone, but you’ve come to the right place.

The Elder Scrolls-esque lore surrounding the trio has bordered on parody, with Sudeikis allegedly taking issue with Wilde preparing a special salad dressing with current partner Harry Styles, whom she’s believed to have had an affair with. The former nanny for the couple told reporters Sudeikis allegedly laid down in front of Wilde’s car to prevent her from delivering this holy salad.

Finally, after days of speculation, it seems the world has some answers. Wilde took to her Instagram story to share a salad recipe from the book Heartburn by Nora Ephron, which, coincidentally, is a book surrounding infidelity and divorce. Absolutely no parallels here whatsoever.

The Don’t Worry Darling director sharing this recipe following the very public discussion is both incredibly petty and beautifully dramatic. If this isn’t her confirming the events transpired as discussed in tabloids, she is just alarmingly immune to discourse.

Wilde and Sudeikis’s saga has been immeasurably strange, with many forgetting it all kicked off publicly when Wilde was served custody papers during a presentation at CinemaCon. Sudeikis denied any involvement in the serve happening so publicly, but now who can tell?

Other classic hits from Wilde in 2022 have included a reported feud with Florence Pugh, cutting an actor almost entirely out of Don’t Worry Darling, and frankly everything from the film’s Venice International Film Fest debut. The promotion around the film far outweighs any onscreen drama she’s ever been involved in, and we thank her for it.