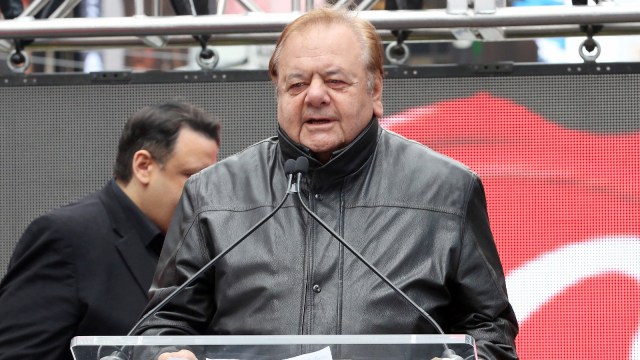 There has been an outpouring of love in the wake of the passing of legendary actor Paul Sorvino, who died from from natural causes this week at 83. But for those who knew him and were closest to him, Sorvino — who was best known for his role of Paul Cicero in the 1990 gangster film Goodfellas — could not have been more different than the thugs and tough guys he played in film and on television.

In addition to being an accomplished actor on stage and screen, Sorvino was also an opera singer, prolific sculptor working in cast bronze, philanthropist, loving husband, and fiercely protective father.

Sensing his somewhat misleading reputation from the roles in which he was so often typecast, Sorvino explained in a 2014 interview why so few people knew the real him.

“Most people think I’m either a gangster or a cop or something,” he told The Orlando Weekly at the time. “But the reality is I’m a sculptor, a painter, a best-selling author, many, many things — a poet, an opera singer, but none of them is gangster, but, you know, obviously I sort of have a knack for playing these things.”

“It’s almost my later goal in life to disabuse people of the notion that I’m a slow-moving, heavy-lidded thug, and most people’s impression of me IS that,” he continued. “Because of the success of Goodfellas and a few other things, but they forget that I was also Dr. Kissinger in Nixon, the deaf lawyer in Dummy, and they forget a lot of things that I’ve done. It would be nice to have my legacy more than that of just tough guy.”

Hopefully Sorvino can rest easy, because the tributes that have surfaced since the news of his passing do indeed reflect a thoughtful, complicated man.

In a statement to The Wrap, Martin Scorsese called his former collaborator a “generous soul” and “irreplaceable artist” whom he had learned a lot from while filming Goodfellas.

“Paul Sorvino was a brilliant actor. He was completely immersed in his craft, and his level of mastery could take your breath away,” Scorsese said. “Look at his performance as Louis Fraina in Reds by Warren Beatty. He found a wonderfully expressive voice for his character, and quite a unique body language: urgent, fervent, and impassioned. Watch it back to back with his performance as the televangelist in Oh God by Carl Reiner. At first glance, it seems like a broad comic turn, a send-up of Jimmy Swaggart and Jerry Falwell. But when you really pay attention, you see that Paul is inhabiting the character completely. It’s hilarious but it’s also sobering and disturbing.”

“I loved working with Paul on that picture,” the director said of Goodfellas. “It wasn’t always easy, but that’s never the point to begin with. Paul was tireless — he never settled for less than a deeper emotional truth. I learned a lot from him.”

“I was really saddened to hear the news of his passing,” Scorsese added. “In part because it was so close to losing Ray Liotta. But it was also the loss of a great, generous soul, and an irreplaceable artist.”

“My father the great Paul Sorvino has passed,” the 54-year-old wrote. “My heart is rent asunder — a life of love and joy and wisdom with him is over. He was the most wonderful father. I love him so much. I’m sending you love in the stars Dad as you ascend.”

Sorvino was a dedicated family man

The two eloped in 2014 shortly after meeting in the green room of the Fox News Channel studios, and even collaborated on a 2017 cookbook, Pinot, Pasta, and Parties, which reflected Sorvino’s love for his mother’s “old school” recipes and family traditions from Naples, Italy.

“He’s just this sweetheart … and loved people,” his widow told Fox News. “He loved life. He loved food, you know, he just loved everything. That’s how I fell in love with him, that’s how he grabbed me because it’s like, how can you not love someone who loves so much? He just was that guy. Paul really touched me and changed my life.”

In the wake of his passing, comments that Sorvino made about disgraced Hollywood producer Harvey Weinstein likewise went viral. His daughter Mira was just one of countless actresses who Weinstein preyed upon, and after she rejected his advances, she believes that he intentionally blacklisted her from future projects.

“It is reprehensible beyond description that women have been treated in this manner,” Sorvino told Los Angeles KCAL 9 News while attending a Golden Globes event in January 2018. “You know, when you’ve had a phenomenal mother like I had, you are automatically a feminist. That’s why I have this wonderful wife. The reality is that anyone who takes advantage of women should be publicly strangled and I’ll — I’ll volunteer.”

Additionally, Sorvino came to his other daughter’s rescue, Amanda Sorvino, in a 2007 incident involving an ex-boyfriend. The then-21-year-old was threatening Amanda and attempting to get into her motel room in Stowe, Vermont, when Sorvino showed up packing heat.

“He expressly stated there was no way through his training that he aimed the gun at this person, he didn’t even threaten him,” Police Chief Ken Kaplan later recalled of the incident. “He just said, ‘I have a gun, I want you to stay away from my daughter, back off,’ because the guy was out of control, and he was.”

Although, like many other aging actors from a certain era, Sorvino was unfortunately a supporter of Donald Trump, and correctly felt that backing the former president made you a Hollywood persona non grata. However, over the course of his life and career, Sorvino led by example, and as such his legacy reflects as much.