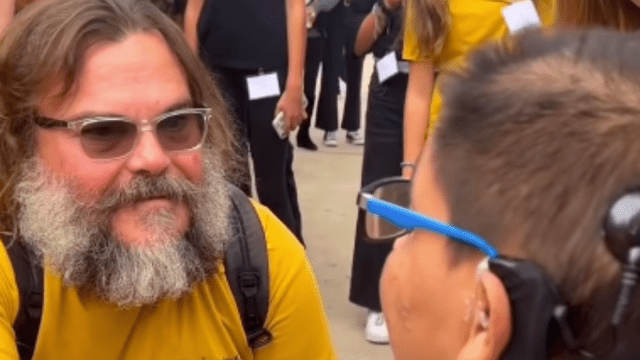 Jack Black has given the internet a nice warm bowl of soul food and reminded everyone that there are still good guys among the Hollywood elite by making the day of a terminally ill teenager whose favorite movie is School of Rock.

The voice of Bowser in the upcoming The Super Mario Bros. Movie hosted the Layla Paige and Friends Walk for TrinityKids Care and was introduced to Abraham on the day. Abraham’s favorite scene in the movie is Dewey Finn’s performance of ‘The Legend of the Rent’.

Naturally, Black being the lovely rockstar he is, serenaded the youngster with the song.

Leading up to the wholesome moment, an off-camera voice asks Abraham to tell Black his favorite part in the movie, and Abraham recites a lyric to the song.

Jack Black offers Abraham his genuine thanks, and reciprocates his love for the movie before erupting into song completely unprompted, to the delight of everyone in the immediate vicinity.

School of Rock follows a deadbeat musician Dewey Finn who impersonates his roommate Ned Schneebly as a school teacher. He shares his love of music with Schneebly’s class, which is quickly reciprocated by the kids as they form a band and rock out.

The hit movie from 2003 has since been adapted into a stage musical by Andrew Lloyd Webber.

Of course, Jack Black will be voicing Bowser in The Super Mario Bros. Movie, and was the undisputed highlight of the first trailer for the animated film.

Hopefully we get to see Black rock out as Bowser when the film hits cinema screens on 7 April 2023.