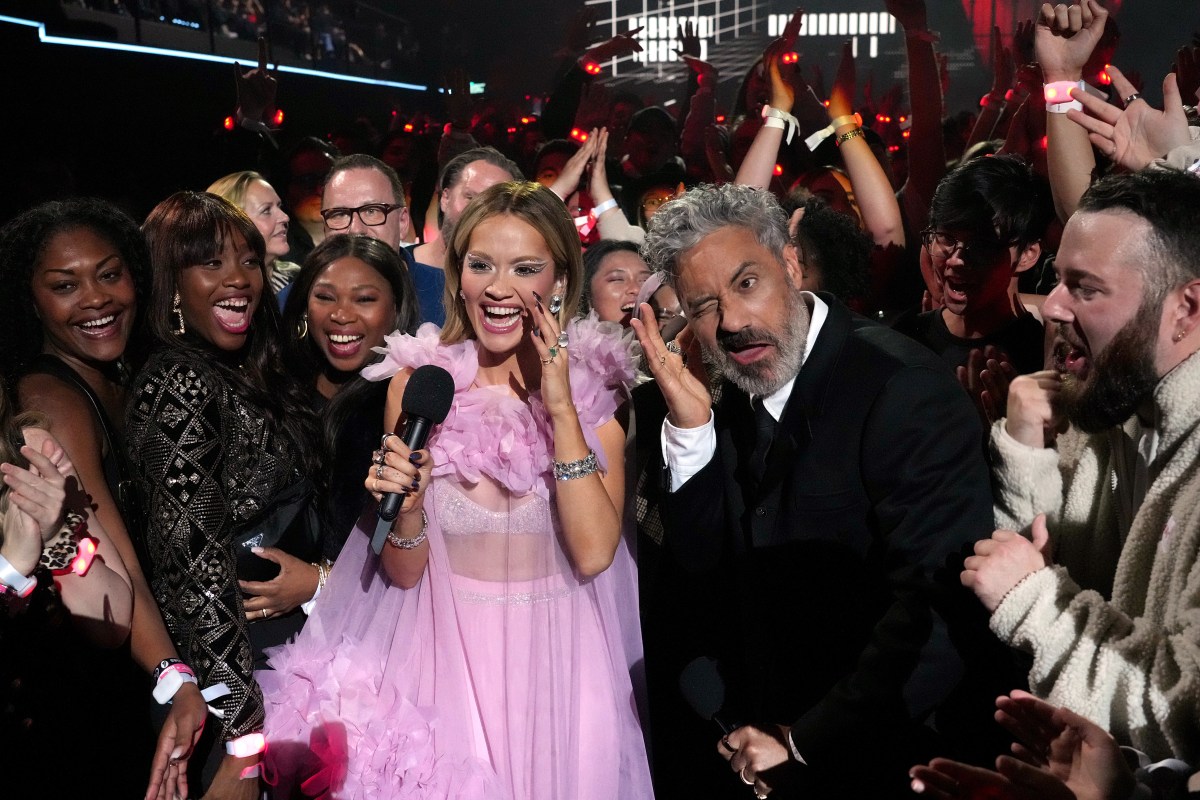 Taika Waititi has been making headlines recently after a viral Reddit thread filled with Marvel fanatics passionately expressed that they wanted the 47-year-old’s character Korg and his films removed from the Marvel Universe.

Waititi, known for directing two of the four Thor projects, has received massive flak following the 2022 release of Thor: Love and Thunder for numerous reasons, including the visuals. Although much has been discussed about Waititi’s work history as of late, many are unaware of his personal life and marriage to singer Rita Ora. This relationship timeline will clarify how Waititi and Ora met in 2018, the brief kissing controversy they experienced with Thor: Love and Thunder star Tessa Thompson and the events that led to their August 2022 wedding.

Before the pair’s first encounter in 2018, Waititi was previously married to film producer Chelsea Winstanley. Waititi and Winstanley were together from 2011 to 2018 and welcomed two children. Meanwhile, Ora’s last public relationship, prior Waititi, was with French director Romain Gavras. Ora and Gavras dated for over six months and split in March 2021.

Ora disclosed on a Feb. 14 Instagram post that she and Waititi met in 2018. The “Poison” vocalist also commemorated the Valentine’s Day holiday by uploading past and present images of her “bestie”. In addition to the photos, Ora wrote the caption, “Us. 4 years ago. To now. Thanks for being cool. And entertaining me forevs..Happy Valentine’s Day, bestie.”

At the time, not much was known about how Ora and Waititi met until November 2022. During an interview with the Daily Mail, Waititi shared that Robert Pattinson brought Ora as a guest to his barbecue. He told the publication,

“You know who brought her to my house? Rob Pattinson. He brought her over. I was having a little BBQ and we just got chatting, we hit it off, became friends. Then for the next three-and-a-half years we were just good mates.”

Despite knowing each other for many years, Waititi also shared they started dating in 2021 when he was 45 and Ora was 30.

Ora and Waititi were romantically linked after the “Let You Love Me” singer updated her fans on the “midweek” activities she participated in an Instagram post shared on April 21, 2021, with people she loved, including the director. Ora also shared a photo of them sharing a hug. She wrote the caption, “Good times, memories, random things on my phone and the ones I love.. #midweekupdate.”

Ora and Waititi’s quiet dating life became a hot subject on May 23, 2021, after paparazzi photos obtained by the Daily Mail went public. The images showcased the couple seemingly locking lips with Thor: Love and Thunder star Tessa Thompson. The publication also reports that the incident occurred outside Waititi’s residence in Sydney, Australia, after the trio allegedly partied all night.

On June 9, 2021, weeks after the paparazzi photos were released to the public, Waititi opened up about the situation during an interview with The Sydney Morning Herald. When asked if he was upset about the images despite it being an intimate moment between the three parties, Waititi told the publication,

“Not really. I think in the world of the internet, everything goes away pretty quick. And also, ‘is it that big a deal?’ No, not really. I was doing nothing wrong. It’s fine.”

Since then, Ora and Thompson have declined to discuss the topic publicly.

August 2021: Rita Ora and Taika Waititi steps out as couple for the first time at The Suicide Squad premiere

Months following the kissing photos scandal, Ora and Waititi would make their first red carpet appearance together as a couple on Aug. 2, 2021, after attending the Los Angeles premiere of The Suicide Squad.

Ora and Waititi brought in his 46th birthday together on Aug. 18, 2021, by having a themed party in his honor.

In the photos uploaded on the singer’s Instagram page, Ora gave fans a glimpse of the food they ate, various decorations with Waititi’s face plastered all over it, and their celebrity friends who attended the festivities. Many guests included Kristen Stewart, Paris Jackson, Rami Malek, Kate Beckinsale, Jodie Turner-Smith, and Ashley Benson.

Following the birthday celebration, Ora and Waititi, who became a Hollywood It couple overnight, would spend the next several months making appearances at many high profile events, shows and premieres. The lists includes the 2021 Met Gala, the 2021 MTV Europe Music Awards, the 2021 Walpole British Luxury Awards, where Ora received the British Artistic Icon Award, the Being the Ricardos movie premiere, and The Tonight Show starring Jimmy Fallon.

February 2022: Taika Waititi’s fans see the funny and loving side of the director while dedicating posts to Rita Ora

Waititi’s love and admiration for Ora were readily apparent in the first couple weeks of February 2022. The director publicly celebrated Ora landing an unknown role in Disney Plus’ Beauty and the Beast prequel series on a Feb. 7 Instagram post by uploading the announcement with the caption, “Fuck yeah!!! I’m super proud of this girl! @ritaora.” Unfortunately, days after the news, the prequel series was axed.

On Valentine’s Day, Waititi gave fans a peek into the couple’s fun and silly relationship dynamic by posting several photos. In one of the images, Ora is seen posing in a magenta trench coat, while Waititi, who appears at the bottom of the snapshot, makes a crazy face. In another picture, Waititi showcased that he’s always down to help Ora get the perfect photo, even if it means holding a leaf blower for a wind effect.

Ora and Waititi made several public appearances during the award season. The couple was seen dressed to the nines at The Critics Choice Awards and Vanity Fair Oscar Party. Ora and Waititi would also be spotted at Dior’s Fashion Show with other guests like Christina Aguilera for the men’s 2023 collection.

On June 7, rumors began circulating online that Ora and Waititi were engaged after The Sun UK published a story releasing intimate details of the alleged event. A close source to the couple told the publication that Ora and Waititi’s alleged proposal was low-key and that they mutually agreed it was time to take their relationship to the next step. The insider said,

“They didn’t do a whole, ‘Will you marry me?’ thing and an Instagram post. There’s no ring or big build-up. They just got closer and closer and eventually said to each other almost simultaneously, ‘I want to marry you.’ It’s actually really romantic and just exactly the way they are together.”

The source also shared that Ora and Waititi planned a small wedding after their busy schedules cleared up and would do a bigger ceremony later in the year. At the time, Ora was working as a judge on The Voice: Australia while Waititi directed other projects.

On June 13, Waititi dismissed an engagement question while promoting his new film Lightyear with Chris Evans on This Morning. Waititi removed his earpiece and stared off into the distance when asked about the alleged upcoming nuptials.

On July 13, Ora would be put in the hot seat while discussing her new Netflix film with Jack Black, Kung Fu Panda: The Dragon Knight. During an interview with Extra, when asked about wedding planning, Ora expressed her happiness. She said,

Taika Waititi and Rita Ora appeared to be on cloud nine when they attended the July 7 premiere of his Marvel film Thor: Love and Thunder in London, England. This was a special occasion for Waititi because this was the second Thor film he directed for the franchise. Thor: Love and Thunder premiered in theaters on July 8.

On Aug. 8, The Sun UK reported that Ora and Waititi allegedly tied the knot after the couple was spotted wearing gold wedding bands. A close source confirmed the news with the publication and revealed that the couple had an “intimate ceremony” in London, England, with close family and friends. The insider stated,

“It was a really intimate ceremony and super special for everyone there. Their nearest and dearest can see how madly in love they are.

Although Ora and Waititi didn’t publicly address the marriage rumors, the star would later appear in Architectural Digest in October. In that video, she was wearing what looked like an engagement ring and a wedding band on her left finger. Even though the couple showcases bits and pieces of their relationship online, little is known about their personal lives.