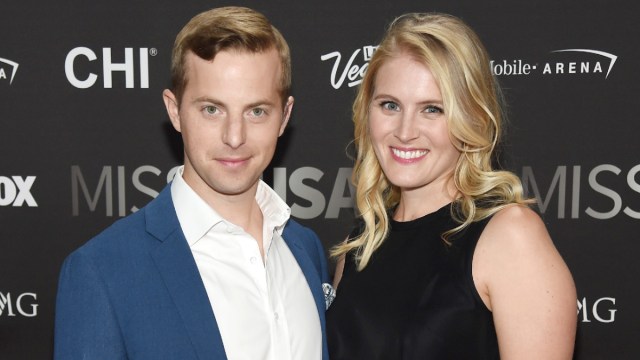 Disgraced The Try Guys star Ned Fulmer and his wife of 10 years Ariel Fulmer both seemed to be in relatively high spirits when paparazzi caught up with them leaving to pick up their kids in Los Angeles on Wednesday afternoon. The couple was spotted together, still wearing wedding rings, just a day after news broke that Fulmer was engaging in an extramarital affair with The Try Guys producer Alex Herring.

As a result, the 35-year-old so-called “Wife Guy” was swiftly ousted from the entertainment group, which also includes members Zach Kornfeld, Keith Habersberger, and Eugene Lee Yang. The Try Guys first formed in 2014 when the former four friends were employed by Buzzfeed, but branched out on their own in 2018 by forming their own production company, 2nd Try LLC.

However, the pair ducked into their Tesla before Fulmer could expand on what was next for his career. Too soon?

Before running into photographers, Ariel released a diplomatic statement on Instagram — though eagle-eyed fans did notice that she removed “wife” from her bio.

“Thanks to everyone who has reached out to me — it means a lot,” she wrote. “Nothing is more important to me and Ned than our family, and all we request right now is that you respect our privacy for the sake of our kids.”

Following reports of the cheating scandal, Fulmer penned a statement of his own on Tuesday, confessing to the affair and expressing regrets for any pain he had caused.

“Family should have always been my priority, but I lost focus and had a consensual workplace relationship,” he wrote. “I’m sorry for any pain that my actions may have caused to the guys and the fans but most of all to Ariel. The only thing that matters right now is my marriage and my children, and that’s where I am going to focus my attention.”

While it remains to be seen that Fulmer’s wife may be capable of forgiveness, he will receive no such grace from his fellow group members, who put out a statement that Ned was unequivocally no longer working with The Try Guys, and that “as a result of an internal review,” they did “not see a path forward together.”

But given the fact that Fulmer was cheating on his wife with an employee, it stands to reason that the affair could have opened the group up to legal action — putting not just his livelihood on the line, but that of everyone in their company.