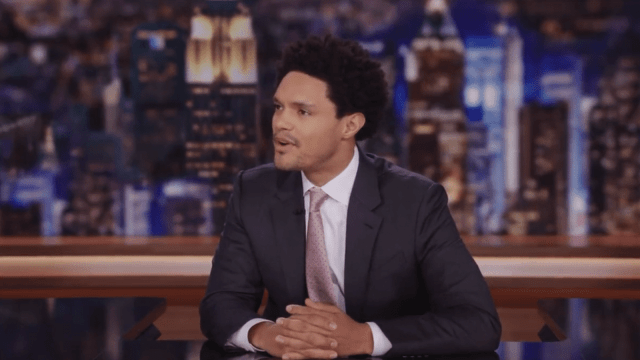 It’s been a big, big, BIG day for Trevor Noah after The Daily Show host was spotted having a cozy dinner with singer Dua Lipa, on a rumored date which is presumed to have gone well, if images of the pair embracing and sharing a kiss are to be believed.

Hot off the back of these rumors, Noah has just announced his intention to depart from The Daily Show to the audience at the taping of the show on Thursday evening, as seen in this clip of his ending monologue.

Noah makes this shocking revelation during the week of his seventh anniversary as host of The Daily Show, and took time out to thank his supporting crew behind the scenes as well as all of the various correspondents, as well as the audience.

He reflects on the beginning of his hosting era, with people considering the move to be a bit crazy and Noah stepping up to replace Jon Stewart as host. Fortunately, Noah was grateful for the journey, which saw him holding the reins of the program through quite a turbulent time in history, citing Trump’s presidency as well as the pandemic as key examples.

“I’ve loved trying to figure out how to make people laugh, even when the stories are particularly shitty on the worst days. You know, we’ve laughed together, we’ve cried together – but after seven years I feel like it’s time, you know?”

Noah attributed the move to realizing just how much he missed certain parts of his life in the two years he spent cooped up inside his apartment during the pandemic, saying that getting back out on the road and performing standup led him to the realization that that part of his life was something he wasn’t quite done exploring.

He wraps up by thanking the network for taking the chance to believe in a random comedian who at the time, wasn’t a household name. He confirms he will continue hosting the show for the time being while the T’s are crossed and the I’s are dotted for the transition to the next era of The Daily Show.