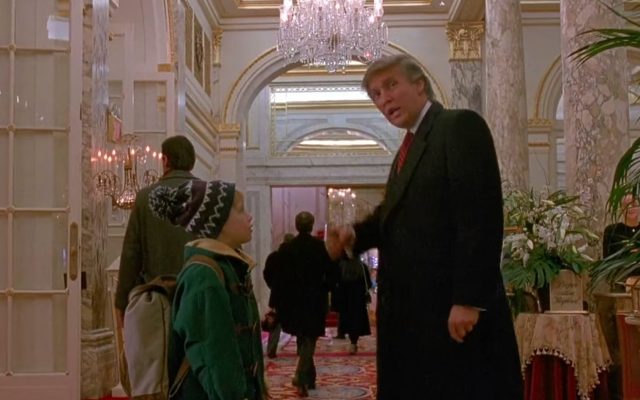 Home Alone 2 is celebrating its 30th anniversary, and curiously its star Donald Trump has just announced his run for presidency in 2024. Coincidence? We think not.

Premiering 15 Nov. 1992, Home Alone 2: Alone in New York saw star Macaulay Culkin reprise his role as Kevin McCallister. Unfortunately for Macaulay, he was arguably one-upped in a single scene where Trump appears and offers the young man some directions around the Plaza Hotel.

Culkin did support recent calls to remove Trump from the film digitally, tweeting his agreement that the twice-impeached man shouldn’t remain in the version currently available on Disney Plus.

Because there is nothing pure or good in this world, it seems fitting Trump announced his presidency on the anniversary of its premier, albeit a few days short of its theatrical release. Originally released Nov. 20, 1992, it’s so close to a major milestone. The idea of people’s childhood movies getting as old as 30 is frankly depressing.

Even more depressing is Home Alone 2 was the last good Home Alone movie, and it happened to feature a man who would later incite an attempted insurrection after losing the election. Hear us out though: Home Alone, with Culkin back, but he’s a fully grown man trying to escape the White House.

Culkin, now a grizzled trapmaster, is the head of security in the Oval Office, and must escape before another insurrection begins following the 2024 election. Starring alongsde him will be Mark Hamill, who plays himself, and acts as his “guy in the chair”. Parks and Recreation star Joe Biden also to appear in a cameo.

The Home Alone quadrilogy can be streamed on Disney Plus, where they recently released a semi-sequel hybrid-reboot in 2021 titled Home Sweet Home Alone. Just like Trump’s run for presidency in 2020, it was an utter failure.