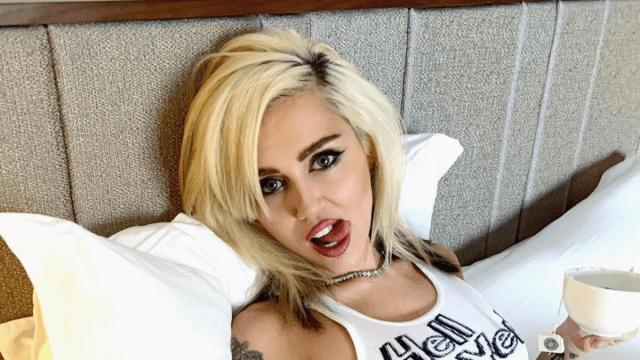 Miley Cyrus has a new beau, Maxx Morando, but no one knows anything about the dude.

There is a trend with country music singers who transitioned into pop stars. They found out what happens when a celebrity steps into the pop star highlight and gets burned too many times. Now, they want their lives to be a little more private or as they say, on the down low.

Taylor Swift is among one of those big-time celebrities who is trying to keep her relationship to herself. Miley is finding it just perfect to follow suit. They don’t need every aspect of their lives shared with the news, but their fans want to know all the details of their love lives. They need to know at least a little bit. So, who is Maxx Morando, and where did he come from?

“People like controversy because that’s what sells.” – Miley Cyrus

Morando made a name for himself as the drummer for The Regrettes. His highlight with them was in 2017 when they played Conan. Since then, he’s been in the L.A. rock scene with a band called Liily of Flush Records. With Miley making some new turns in her own music, it appears they met a few years ago before an actual relationship began.

“I don’t keep secrets because I’m no good at them!” – Miley Cyrus

He seems fine in his relationship with Miley and keeping it low-key. Neither of them is sharing anything on their social media about it. The bad part is that the news follows them everywhere, and the truth is out. They’ve been dating now for over a year. E! News couldn’t control themselves when they saw the two wrapped up in a beautiful, intimate moment together.

“Music is what I breathe, what I love to do. It keeps me alive.” – Miley Cyrus

Miley was practically born into music. Her father, Billy Ray Cyrus, was a huge country star for about five minutes in the early 1990s, and her godmother is Dolly Parton. It’s only fitting that her boyfriend is a musician, too. Miley dating a drummer? That makes sense. However, that’s not entirely the case, and it may come down to simply being happy.

Entertainment Tonight reported, “Miley and Maxx have been having a good time together. They’ve been together for a little while and are just enjoying their relationship. Miley likes the fact that they are low-key as a couple and is just focused on doing her thing and being around people that make her happy, and Maxx does that.”

Miley has been in the headlines since she was a little girl before Hannah Montana was a hit. Of course, she’s an A-List superstar everyone wants to know all about. She’s still just human though, and for many of her fans, her low-key relationship makes a lot of sense.