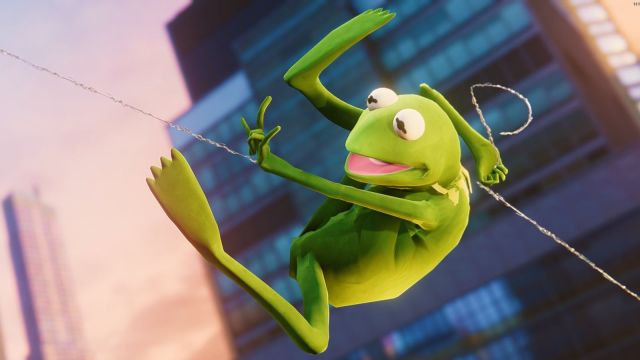 The beauty of PC gaming is the ability to mod a game to your hearts’ content, and following in the wake of mods that replace dragons in Skyrim with the state of Ohio, there’s now a mod that lets you play as Kermit the Frog in Spider-Man.

Unleashed unto this plane of existence by 3D modeller TangoTeds, gamers are finally getting their money’s worth out of the Spider-Man PC port, following several years of its console exclusivity. There’d been issues during the launch of Spider-Man Remastered thanks to some unsavory anti-LGBTQ+ mods. But now, only Kermit remains.

Beautifully modelled and perfectly animated, it’s a mod so good-looking it may convince you to pick up a copy of the game on Steam.

Understandably, the internet is in love with this mod. Kermit the Frog has always been a much more brooding character than many give him credit for, and it’s enthralling to see the puppet become the puppet master against crime. One of the first tweets to popularize the mod saw the sheer terror in one goon’s face.

Then came the proper combat demos, demonstrating how ruthless Kermit is. The Muppet movies are so often parodies of other kinds of movies, maybe this mod could lead to a superhero parody with everyone’s favorite puppets.

It’s a testament to the power of modding that such a well-detailed character model can be made so soon after a release. There’s a goldmine of further mods that could be made and we’re only just getting started.

Spider-Man Remastered is currently available on PC and PlayStation 4. The game is included as part of a PlayStation Plus Extra subscription.