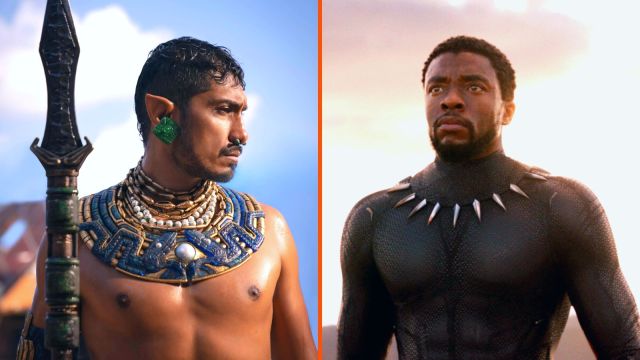 Chadwick Boseman‘s tragic passing in 2020 changed a lot of director Ryan Coogler‘s initial plans for Wakanda Forever, the sequel to his Oscar nominated 2018 Marvel film Black Panther. Namor’s introduction as the antihero, however, was idealized from the start, and even received Boseman’s blessing.

“I had spoken with Chad [Boseman] about that aspect of the script, and he was really excited,” Coogler revealed during EW‘s Around the Table series with the rest of his cast.

The director said the two met at a restaurant in Los Feliz to discuss the film, and the idea of including a storyline revolving around indigenous American people put “the biggest smile” on the actor’s face. “They’re never going to see this coming. It’s awesome,” Boseman told Coogler at the time.

In Wakanda Forever, Namor is the king of Talokan, a centuries old secret underwater civilization in Mesoamerica, hidden from the world much like the African nation led by Boseman’s King T’Challa. Changing Namor’s origins from his Marvel Comics’ counterpart was an important decision for Coogler, who wanted to be “different, but still truthful” to past depictions of submarine kingdoms in popular culture and film.

Despite his enthusiasm about Coogler’s ideas for the Black Panther sequel, Boseman decided not to read any early drafts of the script. At the time he told the director he didn’t want to interfere with any notes from the studio, but Coogler later realized his deteriorating health had made it too hard for him to read anything.

Now that Wakanda Forever has graced screens across the globe, fans are calling it the best movie in Marvel’s Phase Four, and loving Tenoch Huearta as Namor, proving that Coogler’s decision, much like Boseman believed, was the right one.