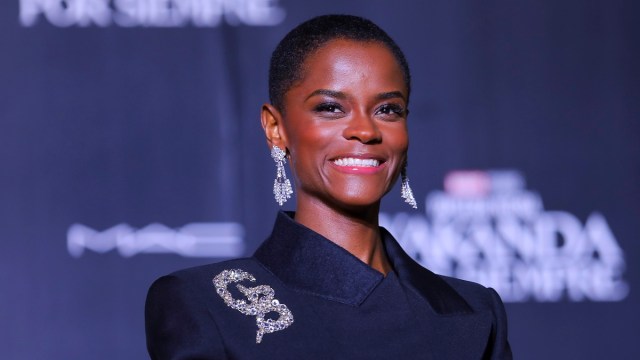 Photo by Agustin Cuevas/Getty Images for Disney
Review of:

One of the most talked-about tales looming in the background of Black Panther: Wakanda Forever throughout its development, production, and release is the vaccination status of star Letita Wright.

While it’s entirely up to her whether or not she wants to be inoculated from COVID-19, posting falsehoods on social media before brushing off criticism and deleting her accounts entirely wasn’t a particularly good look, and she’s staunchly refused to answer any questions on the matter during the press trail for the Marvel Cinematic Universe sequel.

However, it appears as though the new holder of the titular mantle draws the line at The Hollywood Reporter questioning whether her alleged views on the subject will hamper her chances of awards season recognition, with Wright taking to her Instagram Stories to blast the outlet in no uncertain terms.

“I had to unblock The Hollywood Reporter just to post this. Scott Feinberg and all at this publication. You’re all incredibly disrespectful. How dare you. You mentioned my name alongside men who have been accused of abuse & sexual misconduct. This is vile behavior. At this point a personal vendetta towards me. I’ve done nothing wrong but respectfully refused to do interviews with this publication. Stop your nonsense. I apologised TWO years ago. Remained silent on the topic. You lied and said I continued talking about it with my cast & crew on my set. THIS WAS NOT TRUE. ASK MY PRODUCER AND DIRECTOR. The film was successful. Your agenda towards me is now even more clear. I won’t remain silent. Stop your disgusting behavior.”

While we can read between the lines given that the new Black Panther has dodged the line of inquiry anytime it’s put to her, Wright continued to lash out at what she called “disgusting” journalistic practices.

“This personal agenda with your friends at The Hollywood Reporter is disgusting I’ve remained silent as the world told me to kill myself two years ago for a video I posted and apologised for.I kept my head down and focused on my craft. And now I’m at the other side of it. Here you are, as a so called journalist we are meant to trust, putting my name into this nasty article for what? You lack substance, you clearly have nothing to report. The movie is beautiful, impactful, and breaking box office. I worked my ass off with my cast and crew to dedicate it to my Brother. How dare you. Did my performance rattle you that much? It was that excellent huh? I’m still here, making an impact, still creating projects that touch peoples hearts and it’s not going to stop. Get a life, like for real.”

Like we said, the 29 year-old is well within her rights to hold whatever belief system works best for her, but it’s clear that the constant chatter has had an effect if she found herself obligated to go to town on THR for constantly using it as the backdrop to any story it writes about her.