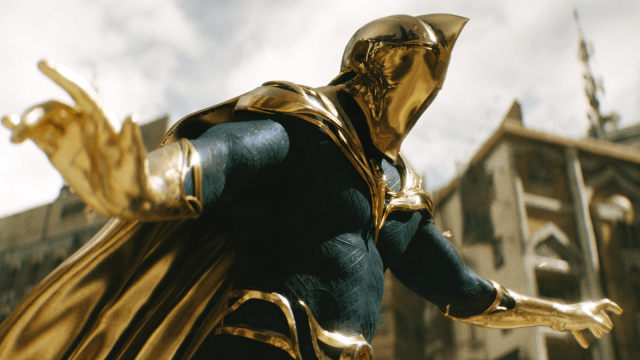 Black Adam finally hits theaters this weekend, and it will be introducing its audience to the Justice Society of America.

One of its members, Doctor Fate, portrayed by Pierce Brosnan, can warp reality and see into the future. Sounds a little derivative of a certain wizard from a certain other comic book franchise, no? Well, the DC comics Twitter account has given the world a little reminder of who came first.

This has sparked a passionate reaction from both Marvel and DC fanbases, inciting a bit of a ‘chicken and egg’ debate in response.

If we’re talking strictly about the source material, then there is no denying that, yes, Doctor Fate came before Doctor Strange. In film terms, though, Strange did make his cinematic debut first, with Pierce Brosnan even admitting he drew inspiration from Benedict Cumberbatch’s Doctor Strange, as pointed out by this Twitter user.

The heated ‘who wore it better’ debate continues in response to the incendiary tweet from DC, but that question will be definitively answered when the world gets around to seeing Black Adam.

If early reviews are any indicator, it seems like Doctor Strange may have the edge here, but staunch DC fans are passionately defending against the film’s naysayers.

Our advice would probably be to stay away from the internet and the discussion altogether, for fear of spoilers. Reports and reactions to Black Adam’s post credits scene are already making the rounds, including Dwayne Johnson’s take. It’s quickly becoming DC’s worst-kept secret.

Instead, go make up your own mind when the Black Adam hits cinemas on Oct. 21.