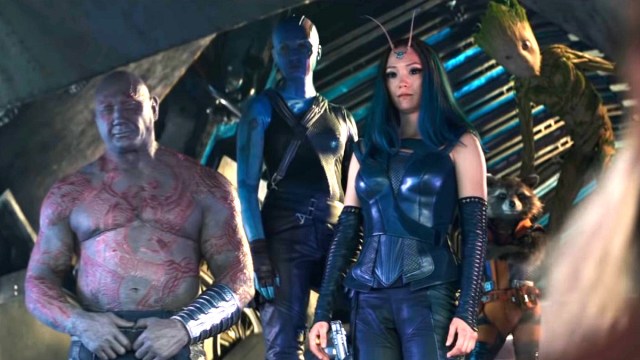 James Gunn was hardly shying away from teasing his presence at this weekend’s San Diego Comic-Con, and the filmmaker delivered in style with the first look at next year’s long-awaited Guardians of the Galaxy Vol. 3.

By the time the next adventure for the cosmic band of misfits lands on May 5, exactly seven years to the day will have passed since Vol. 2, marking the longest-ever gap between standalone Marvel Cinematic Universe features. Fortunately, it sounds as though it’ll be more than worth the wait.

Peacemaker breakout star Chukwudi Iwuji has also been confirmed as the High Evolutionary as a result, a casting call that a lot of fans predicted a while back. Gunn is happy to call out false rumors, but he doesn’t say much at all when they’re right on the money. In the most bonkers hiring we’ve heard in a long time, Borat breakout Maria Bakalova will voice Cosmo the Spacedog, too.

Both Gunn and Dave Bautista have made it clear they’re done with the Guardians once Vol. 3 arrives, and as sad as that day will be when it comes, we’re inclined to believe the irreverent intergalactic outcasts will be going out with a bang.

There’s no word on what the future may hold for Chris Pratt’s Star-Lord, Zoe Saldana’s Gamora, Pom Klementieff’s Mantis, Karen Gillan’s Nebula, Vin Diesel’s Groot, or Bradley Cooper’s Rocket, but we’ll cross that bridge when we get to it, because Guardians of the Galaxy Vol. 3 promises to be one hell of a ride.

Gunn has been teasing a major character death ever since he returned to the director’s chair, but he did make a point of saying in Hall that “some stories have an end, doesn’t mean everyone dies”. That surely means that at least some of the key players will live to fight another day.